Limb sport of 'Miyagawa' Satsuma mandarin. According to Saunt (2000): "Miyamoto arose as a limb mutation discovered in 1960 on a Miyagawa Wase tree on L Miyamoto's property, Shimotsu-cho, Wakayama Prefecture.

RRK, 8/69/2010: "Although thought to be virus-free when first released, it was discovered that Miyamoto was carrying citrus mosaic virus, known in Japan as 'Toromikan' (tiger mandarin) which slowed down the rapid increase in plantings. Nevertheless, Miyamoto is currently the most popular Goko Wase [editor's note: very early satsuma group] variety with an estimated 2,500 ha in production.

"Miyamoto, which matures 10 days and 15 to 20 days earlier than Okitsu and Miyagawa respectively, has other superior traits such as good colour, particularly the flesh, and a high Brix level. The fruit is medium in size and more spherical in shape than Okitsu or Miyagawa. Miyamoto is reported to be a hgih yielding variety and has a tendency to set a large crop."

‘Miyamoto’ Satsuma is reported to be a limbsport of ‘Miyagawa’ discovered on the property of L. Miyamoto, in Wakayama, Japan, and was donated to the Fruit Tree Research Station in Okitsu, Shizuoka, Japan. Budwood was sent to the Instituto Valenciano de Investigaciones Agrarias in Valencia, Spain, in 1988 and donated to the CCPP in 2007. Of the different cultivars in the Goko Wase very early maturing group of satsuma mandarins, ‘Miyamoto’ is currently the most popular variety with an estimated 2,500 ha in production (Saunt 2000). Fruit of ‘Miyamoto’ matures 10 days earlier than ‘Okitsu’ and 15 to 20 days earlier than ‘Miyagawa’ and has other superior traits such as good rind and flesh color and high sugar content at maturity (Saunt 2000). The fruit is reported to be medium in size and more spherical in shape than ‘Okitsu’ or ‘Miyagawa’ with high yield (Saunt 2000). In China, the marketing season commences in middle-late September. In those areas of China with higher heat accumulation, the fruit matures 15 days earlier than ‘Miyagawa’ fruit (Deng 2008).

Trees of ‘Miyamoto’ were planted in the Demonstration blocks at Exeter and Riverside last spring. Once the young trees of ‘Miyamoto’ begin fruiting in CA, quality traits of this cultivar will be compared with other satsuma selections from the same locations to determine the degree of similarity in California. (From Siebert, T., Vidalakis, G., Krueger, K., Bash, J., and Kahn, T. 2011. Background and initial evaluations of recently introduced cultivars distributed by the Citrus Clonal Protection Program. Citrograph.  2(4): 28-35)

Please refer to the CCPP for information on an approved budsource. 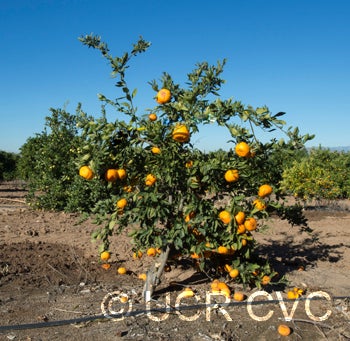 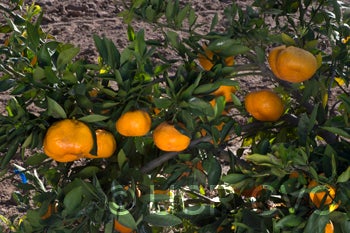