Received as budwood from Sao Paulo, Brazil, via CCPP, 2006.

The presumption is that this variety originated as a bud mutation from the Washington or Bahia navel orange.

RRK, 12/2006: "Collected from trees no. 2, 3, 4, 60 of the orchard of Vital Pacifico, at Araras, State of Sao Paulo; this tree is one of the selections of the Bahianinha Araras [sic] type." (from PI book). "The presumption is that this variety originated as a bud mutation from the Washington or Bahia navel orange. Webber [in the 1st edition of The Citrus Industry, 1943] has presented evidence, however, that it may not have originated in Brazil, as commonly supposed, since it appeared in a planting of navel orange trees made at Piracicaba, Sao Paulo State, about 1907 - 1908 with budded trees imported from the United States, presumably Florida. That this variety is unstable and has subsequently given rise to other clones is clear from the literature and the existence of the two smaller-fruited selections [Ivers and Thomazzelli]". (The Citrus Industry, Vol I, P 480, 1967). According to the Citrus Industry, Vol 1, P 480 (1967) and Saunt (Citrus Varieties of the World, 2000), 'Bahianinha' differs from 'Parent Washington' in having smaller, more oval-shaped fruit with a smaller, closed navel and a thinner rind. It is stated to be productive but smaller and less vigorous than 'Parent Washington'. It is 1 - 2 weeks earlier than 'Parent Washington' and has good fruit quality when grown on an appropriate rootstock. It is stated to be less prone to alternate bearing than 'Parent Washington'. These differences are stated to be less pronounced in California as compared to Brazil. 'Bahianinha Piracicaba' became popular in Brazil due to its desirable size for the export market. It is better adapted to hot, tropical climates than is 'Parent Washington' and has more recently been planted extensively in the Corrientes Province of neighboring Argentina due to this characteristic.

This accession is stated to be an example of the 'Araras' strain but little information is available as to how this differs from the standard 'Bahianinha'. There have been various other selections recently brought into the US that are probably quite similar: 'Bahianinha' (PI 133261), 'Bahianinha' (RCRC 4167), and 'Bahianinha Monte Parnazo' (RRUT 184). 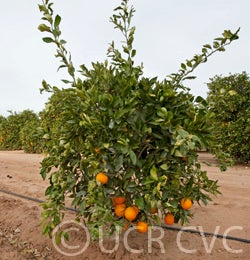 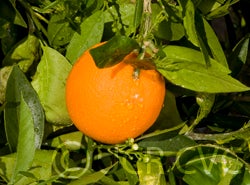