Received as budwood from Japan via Glenn Dale (requested by W.P. Bitters), 1983.

Fukumoto navel orange selection (VI 430) was introduced into California from Japan via the USDA Glenn Dale quarantine facility at the request of W.P. Bitters in 1983.  S. Fukumoto, from Kokawa-cho in Japan was the first to grow this selection in Wakayama Prefecture.

This import was chosen by Dr. W.P. Bitters as the best appearing navel in a Japanese produce display.

EMN, 12/14/1989: Trees of Fukumoto/Flying Dragon in SH are small & weak growing; fruit is small on average but best color of all. In 12B, trees are of average vigor; fruit medium sized at best, good color. Fruit still a bit tart- probably mid-season in maturity.

This early maturing navel orange selection reaches legal maturity three to four weeks before Washington navel and is one of the earliest to reach color-break.  One of the most outstanding characteristics of this selection is the deep reddish rind color of the fruit.  The fruit are harvested from mid-October to late December in California.   Fukumoto trees tend to be smaller than other navel selections and appear to produce more chimeras than most navel orange selections.  One additional major concern is reports in 2002 of decline of Fukumoto trees grown on C-35 and Carrizo citrange rootstocks (Marais and O'Connell 2002).  Although in Japan, Fukumoto trees are commonly propagated on Trifoliate orange rootstocks, and in California they have been most commonly propagated on C-35 or Carrizo citrange rootstocks.  Those trees propagated on Carrizo exhibit symptoms of foamy bark rot syndrome which includes lanky zigzag shoot growth, with development of abnormally large leaves and oozing of gum at the base of shoots and through splits in the bark at the crotches of branches.  These symptoms have also been observed when Fukumoto is grown on Swingle citrumelo rootstock, but not when grown on sour orange or Volckameriana rootstocks. Fukumoto trees propagated on C-35 have symptoms that are more typical of a genetic rootstock/scion incompatibility. 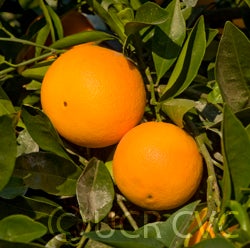 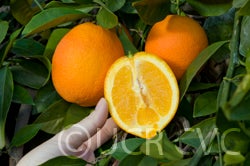 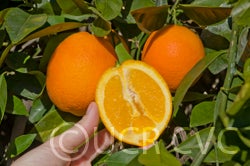 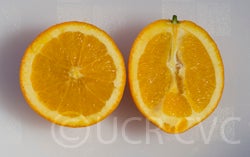 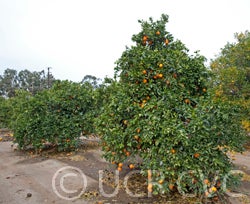