Main season of ripeness at Riverside

Description and use (OJB and DK)

The tree is small and shrubby with an open habit. It is very frost-sensitive. Citron leaves are distinctive in form, being oblong and somewhat rumpled, with serrate margins. The flowers and new leaves are heavily tinged with purple. The very small immature fruits may also be flushed with purple, so that they appear almost brown. The 6- to 12-inch fruits split longitudinally at the end opposite the stem, as the carpels separate into segments that look somewhat like human fingers. The rind is yellow and highly fragrant at maturity, with a characteristic aroma of violets or osmanthus, largely derived from a compound called beta-ionone (Shiota, 1990). The interior of the fruit is solid albedo (the white part of the skin) with no juicy pulp or seeds.Buddha’s Hand citron fruits usually mature in late fall to early winter and hold moderately well on the tree, but not as well as other citron varieties.

In China the Buddha’s Hand citron symbolizes happiness and long life, because its name, “fo-shou”, has those meanings when written with other characters. Chinese like to carry the fruit in their hands, place it on tables in their homes, and present it as a sacrificial offering at temple altars. Though esteemed chiefly for its exquisite form and aroma, the Buddha’s Hand fruit is also eaten in desserts and savory dishes, and the sliced, dried peel of immature fruits is prescribed as a tonic in traditional medicine. The tree is very popular as an ornamental, often in bonsai form, in pots. The Buddha’s Hand was important by the 10th century A.D. in Fujian. Chinese artists classically depicted the fruit in jade and ivory carvings, in prints, and on lacquered wood panels (Simoons, 1991).

In Japan the “bushukan,” as the Buddha’s Hand citron is called, is a popular gift at New Year’s, for it is believed to bestow good fortune on a household. The Japanese buy the fruit at decorative ornament shops, and place it on top of specially pounded rice cakes, or use it in lieu of flowers in the home’s sacred tokonoma alcove (Elizabeth Andoh, pers. comm., 1997).

Although the Buddha’s Hand tree bears fruits that are different from other citrons in shape, it is otherwise a typical member of the species. It is usually considered as one variety in the United States, but in China there are actually at least a dozen named Buddha’s Hand varieties or subvarieties, differing in fruit shape, color and size, and the tree’s growing habit, etc. These varieties are classed in several types grown for specific purposes, such as fruit production or bonsai tree sales (Guo, 1993; Chen, 2002; Chen, 2003; Zhang, 2007).

In Yunnan a variety called “Muli” or “Xiangyanggo” has fruit characteristics intermediate between the common and the Buddha’s Hand citron (Wang, 1983; Gmitter, 1990). Along the same lines, Hodgson (see below) writes that in one clone “only part of the fruits are fingered and the rest are corrugated, lacking in flesh, and contain seeds hanging free in the locules.” There also exists a variegated form. Clearly the CVC accession (CRC 3768) is a standard Buddha’s Hand (no pulp, no seeds, no variegation), but its particular variety or subvariety has not yet been determined.

“Buddha’s Hand citron” and “Fingered citron” are alternative names for the same variety or group of varieties. In China, where numerous scientific studies of the Buddha’s Hand citron have been published, its Chinese name is often mistranslated into English as “bergamot,” which properly refers to C. bergamia (this true bergamot, another aromatic citrus, is a natural hybrid of sour orange and limetta [C. aurantium x C. limetta]).

Cultivation of Buddha’s Hand citrons in China and California (DK)

In China, the Buddha’s Hand citron “has long been cultivated in Weishang county, western Yunnan, at elevations up to 1500 m” (Gmitter, 1990). Currently the Chinese grow some 2,000 hectares (5,000 acres) of Buddha’s Hand citron, mostly in the Jinhua district of Zhejiang province, south of Shanghai (Xiuxin Deng, pers. comm., 2007).

A treatise on citrus from the late 19th century (Lelong, 1888) mentioned that the Buddha’s Hand citron had been introduced to California from Japan, but for about a century thereafter the tree was rarely grown in the state, and only as a curiosity in private gardens. In the early 1980s virtually no commercial plantings of Buddha’s Hand existed in California, but as of 2008 there were at least 10 hectares (25 acres) farmed by specialty citrus growers. The fruit is sold at Asian markets, upscale supermarkets and farmers markets, from California to the East Coast, mostly for its unusual looks and exquisite fragrance. It is also used for flavoring savory dishes, desserts and alcoholic beverages (such as vodka), and for making preserves.

Budwood of this accession is available through the Citrus Clonal Protection Program. Many nurseries sell Buddha’s Hand trees, which are quite popular in home gardens.

The trees are very cold-sensitive, and require an almost completely frost-free location. For commercial growers, packing and postharvest practices are tricky, because the fruits can’t be processed on a standard packing line, need to be cleaned and buffed by hand, and tend to develop mold quickly.

Description by Water T. Swingle and Phillip C. Reese in “The Botany of Citrus and Its Wild Relatives,” in The Citrus Industry, Volume 1, Chapter 3, p. 372

Like the species except in the fruit, which is split into a number of finger-like sections. Usually pulp is lacking, or if present is very scanty.

The fingered citron is well known and highly esteemed for its fragrance and beauty in China and Japan, where it is called “Buddha's Hand Citron” (Fo Shou kan in Chinese, Bushu-kan in Japanese). It is used by Chinese and Japanese for perfuming rooms and clothing. It is also grown as a dwarf plant, of which good fruiting specimens are highly prized for ornamental purposes.

Description by R. W. Hodgson in “Horticultural Varieties of Citrus” in The Citrus Industry, Volume 1, Chapter 4, p. 556: A most unusual and interesting citron is the fingered or Buddha’s Hand citron (fig. 4-71) of the Orient (bushukan of Japan), where it has been prized for centuries, especially in Indo-China, China and Japan. As the name indicates, the fruit is apically split into a number of fingerlike sections, somewhat resembling a human hand. There appear to be two clones—one in which all the fruits are deeply fingered and lacking in flesh development and seeds, the other in which only part of the fruits are fingered and the rest are corrugated, lacking in flesh, and contain seeds hanging free in the locules. Both are typical acid citrons in all other respects and would seem to constitute clonal varieties rather than the botanical variety sarcodactylis as they are classified by Swingle (see chap. 3, p. 372).

Tolkowsky, Samuel. 1938. Hesperides: a history of the culture and use of citrus fruits. John Bale, Sons and Curnow, London. 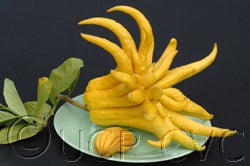 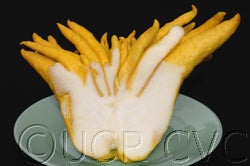 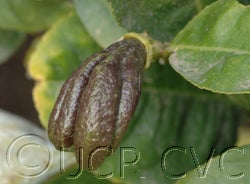 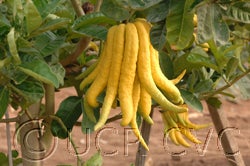