Parents unknown. Jaffa was introduced into Florida by H.S. Sanford in approximately 1883, presumably by seed.

JEC: Buds secured 6/07/10 from the home orchard of C.D. Hubbard. The tree from which the buds were taken, he claims to be an especially good one, holding its color late and not puffing. It is possible that this is nothing very extra."

3/23/1987, EMN: Jaffa & Joppa look similar externally but Jaffa is seedier and sweeter at this time. Both are typical sweets, not Shamouti-like.

In the literature and otherwise, this variety has sometimes been confused with Shamouti or Palestine Jaffa, the principal variety of Palestine and Israel, which it resembles only slightly. On the other hand, it somewhat resembles Joppa.  Almost certainly both Jaffa and Joppa are clones of the Palestine beledi seeding group. Jaffa was introduced into Florida by H. S. Sanford about 1883, whether as budwood or seeds is not known, but presumably the latter. Joppa was named about 1877 in California as a seedling from seeds obtained in Joppa, Palestine. In this general connection, it is of interest to note that Shamouti is considered to have originated as a limb sport in a Palestinian beledi tree.

Because of its comparatively low seed content, cold resistance, and good quality, Jaffa early became popular in Florida and attained the status of a major midseason variety. The greater productivity and superior quality of Pineapple, however, soon caused it to lose favor, although Jaffa still remains important there and to some extent elsewhere. For processing, however, Jaffa's susceptibility to Alternaria blossom-end infection is a further cause for its decline in popularity in Florida." 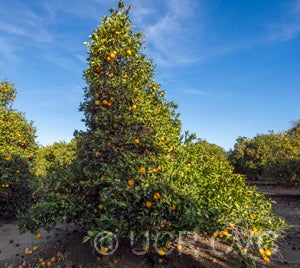 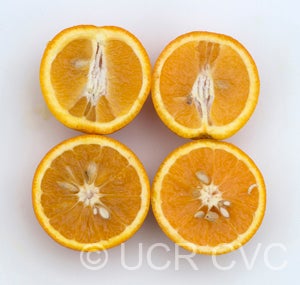 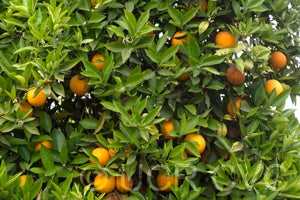