2/24/1988, EMN: An unusually resistant native wild orange with large fruit, neither sweet nor sour, very thick skin, which is used for preserves. Well named as bittersweet. Not as sour as Brazilian sour orange but certainly couldn't masquerade as a sweet orange either. Other than less bitterness, this fruit is much like a typical sour orange.

"The bittersweet orange group, which contains at least two varieties, may be regarded as a subgroup of the common bitter orange, from which it differs mainly in lower acidity and better flavor.

Formerly thought to be a hybrid of the sweet and sour oranges, the weight of evidence suggests that the bittersweet orange originated as a mutation from the latter.  It appears to be identical with thc fruit described by Risso and Poiteau (1818-22, p. 101) as the sweet-fruited bitter orange of the Mediterranean basin.  It seems likely that the Spanish took this orange to both Florida and South America, for it was early found in the former and occurs extensively in Paraguay where it comprises an important source of oil of petit grain.

Minor differences that characterize most of the bittersweet oranges include somewhat denser and more compact habit of growth, broader and less taper-pointed leaves, and paler-colored fruit of slightly smaller size and smoother rind texture.

Two named varieties, both of which doubtless consist of more than one clone, are Bittersweet of Florida and Paraguay (Apepu).  They are so similar as to be scarcely distinguishable." 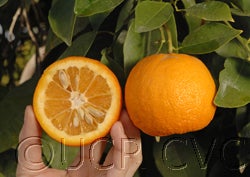 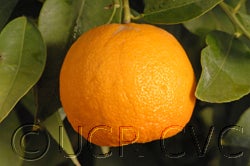