Parents unknown. Source of seeds unknown but presumed to be Florida.

2/24/1988, EMN: History of this accession and Panache indicate they could (or should) not be the same, but description of Panache in The Citrus Industry would fit this accession pretty well. Variegation in foliage is scattered in tree, most leaves have none. Fruit variegation is seen in virtually all fruit to a greater or lesser extent; this consists of depressed rind areas of light yellow, generally running longitudinally from stem end to apex. On some fruits, most of the rind surface is depressed and pale yellow. Interior is typical of sour orange.

2/11/2008, OJB, TS & DK: Variegated Sour was never very variegated, and the leaves were never variegated, said OJB. We are able to find only a few variegated fruits on the tree. Medium rind thickness for sour orange; few seeds; juice has pleasant flavor, no nasty aftertaste; but skin has typical bitter flavor.

"While variegation is not uncommon in citrus fruits, clones are comparatively rare in which it is exhibited in both foliage and fruits combined with good vigor and attractive appearance.  A bitter orange clone which meets these requirements occurred about 1920 as a seedling in a nursery of the Citrus Research Center, Riverside, California.  Since Variegated reproduces from seed to a remarkable degree, it is believed to have originated as a nucellar chimera.

It is characterized by vigor, though not as great as the seed parent, and the variegation is manifested mainly in the fruits, a high percentage of which are beautifully striped with yellow and deep orange.  It has been propagated under the name Variegated Sour.

That one or more clones of similar appearance are known in the French Riviera is clear from literature references to the Bigaradier Panaché." 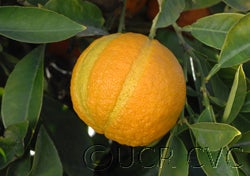 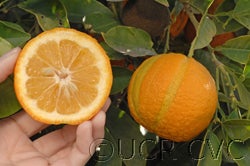