This bud mutation was selected by A.D. Shamel in the Chase Eureka grove at Corona in 1911.

1/14/1988, EMN: Both foliage and young fruit attractively variegated but fruit variegation fades with maturity and mature fruit could easily masquerade as an ordinary Eureka. 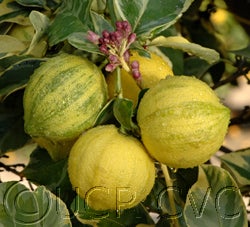