HJW, 1/26/1934: This is Garey's Med. sweet introduced by Garey of L.A. and considered by Florida growers as identical with Maltese oval introduced earlier by Gen Sanford. Our tree CES 590 and Maltese CES 274 seem on careful study of fruit, tree, and foliage to be surely the same. Tree and foliage very characteristic. As Gen Sanford introduced and named another Mediterranean sweet which is different, it seems that Garey's Med. sweet should be called Maltese oval.

EMN, 2/8/1988: Still seems identical to CRC 274, Maltese Oval. Since H.J.Webber suggested we change the name on this accession in 1934 (see above), and 54 years have gone by without action, I hereby take Dr. Webber's suggestion and make said change lest it (his suggestion) becomes 100 years old without giving birth.

Tree vigorous, large, spreading, and drooping; leaves long, narrow, somewhat rumpled, and of paler color than most.  Distinctive in appearance.

Under its California name, this variety soon became important as a midseason variety, maturing between the superior Washington navel and Valencia oranges.  With the expansion of the California industry into areas of different periods of maturity, overlapping production of these two varieties resulted.  As a consequence, Mediterranean Sweet rapidly lost favor and was replaced.  In the meantime, it was introduced into South Africa where it still retains some importance as a midseason variety, although it is no longer planted.

Two clones are recognized in California which differ only in fruit form, one being prevailingly round and the other oblong to oval." 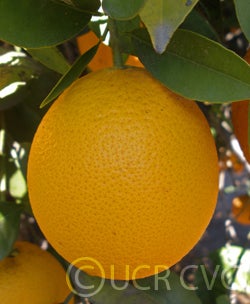