Received as budwood from Spain via CCPP,  2011.

A cross between 'Avana' mandarin and 'Duncan' grapefruit.

Used as an indicator plant. Mapo is a cross between "Avana" mandarin and grapefruit, "Duncan", very early. Its fruits have a thin skin that is mostly green even when fully ripe. The flesh is yellow-orange uniform, has a pleasantly sour/bitter taste with some notes of mandarin. It 'a tree of medium strong vigor, an expanded globose, rounded, with branches that tend to bend down and showing spines only on the most vigorous. From this fruit is produced Mapo. Mapo liquor produced by the Campari Group, also known for its commercials. Information from agraria.org, Campari group, and spotlandia.com 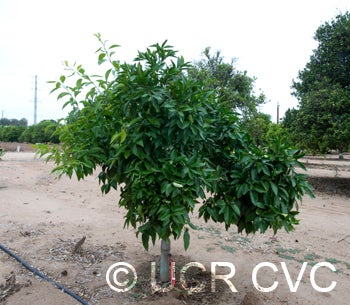