‘USDA 1-77-19’ (also referred to ‘USDA 77-19’) is reported to be a tangelolo and a grapefruit-like hybrid developed by the USDA citrus breeding program. It is an irradiated hybrid of ‘Pearl’ tangelo (a hybrid of ‘Imperial’ grapefruit and Willowleaf mandarin made by Dr. H.B. Frost and introduced in 1940) and ‘Duncan’ grapefruit (a white, seedy grapefruit believed to be the oldest grapefruit variety grown in the United States). The original hybrid ‘USDA 75-8’ was selected from a population of F1 hybrids in 1973. Jack Hearn then irradiated seeds of ‘USDA75-8’ in 1980 and produced siblings ‘USDA 77-19’ and ‘USDA 1-74-15’ (Chaparro, 2000; McCollum and Chaparro, 2004). Later, ‘USDA 1-74-14’ was dropped from the program due to small fruit size, poor flavor and low yields.

According to Chaparro (2000) and McCollum and Chaparro (2004), ‘USDA 1-77-19’ fruits are low-seeded and mature early, ripening in late September while the rind is still green. It is reported to have good mild, low acid, flavor while lacking typical grapefruit bitterness. The internal flesh is light to “cream” yellow and firm. The fruits are medium in size, with a smooth medium yellow peel. The trees have a spreading growth habit with medium vigor. Chaparro (2000) reported the trees having superior vigor and health when budded on Carrizo citrange and sour orange rootstock in Leesburg, Florida. He also stated in unpublished data from taste tests that consumers like the flavor of USDA 1-77-19 and would purchase the fruit.

‘USDA 1-77-19’ is reported to have a postharvest breakdown issue; therefore McCollum and Chaparro (2004) conducted an experiment to evaluate the postharvest behavior of this variety after ethylene and fungicide treatments to the fruit. Observations suggested this variety is more sensitive to ethylene exposure in the de-greening process (similar to ‘Oroblanco’) and chilling injury indicating a need to determine ideal storage temperatures.  ‘USDA 1-77-19’ has a tendency for stem-end rot and may require fungicide treatments to prevent postharvest decay.

Stated by donor to be a tangelolo and a sibling of USDA 1-74-15. Produced by irradiation of USDA 75-8 (C. xtangelo 'Pearl' X C. paradisi 'Duncan') by Jack Hearn in 1980 (Chaparro, 2000; McCollum and Chaparro, 2004). Pathogen-tested budsource of RRUT 314, which was a reintroduction of RRUT 224 and RRUT 287. All three are now inactive and RCRC 4203 is the active accession of this genotype.
Stated to be a "low seed tangelolo" and "early season, non-bitter grapefruit-like hybrid, has postharvest breakdown problem." This genotype is said to have superior flavor as compared to its sibling (USDA 1-74-15) but to be seedier and to have smaller fruit.

According to the USDA New Variety Synopsis, 1995, USDA 1-77-19 is "Nearly seedless; smooth yellow fruit, fairly round; low acid. Selected mainly as a very early maturing type for fresh fruit use, this potential variety is in the latter stages of testing. The fruit is much like white grapefruit in appearance and is medium in size. It is seedless or nearly so and will pass fresh fruit standards in early September of most years. The taste is very pleasant and low acid with no bitterness evident. Fruit hold exceptionally well on the tree with little tendency to dry out before harvest." See Chaparro (2000) and McCollum and Chaparro (2004) for more information. (RR Krueger, 09/26/2008) .

Please refer to the CCPP for information on an approved budsource. 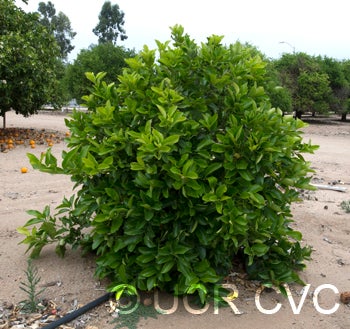 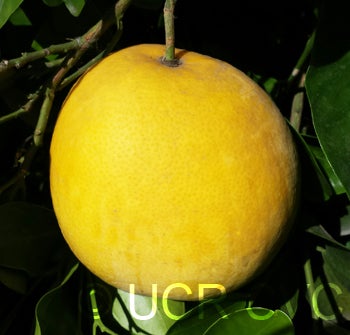 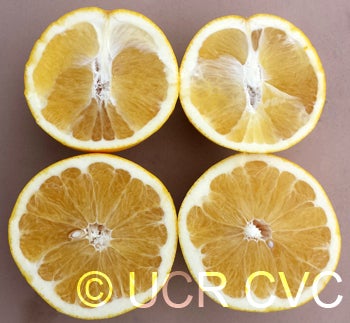 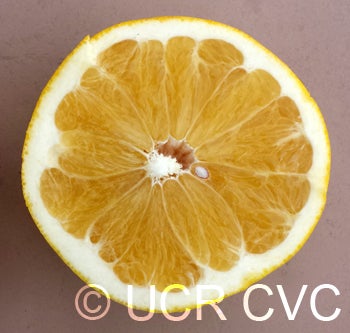 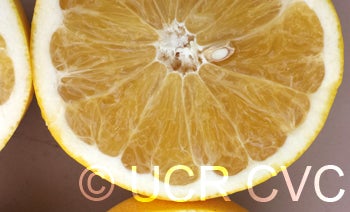