Received as budwood from the UCR Citrus Breeding Program, 2007.

According to Siebert et al (2010): "'FairchildLS' is an irradiated selection of 'Fairchild' mandarin developed at UC Riverside. The distinctive trait of 'FairchildLS' is that it is considered to be low seeded (2.4 seeds per fruit) despite any cross-pollination. 'FairchildLS' fruit are deeply oblate in shape with no neck. The fruit is medium sized for a mandarin (classed as Large by State of California standards) averaging 64 mm (2.5 in.) in diameter and 56 mm (2.2 in.) in height with a very smooth, deep orange rind color. The rind is relatively thin and at maturity is considered moderately easy to peel. The fruit interior has fine flesh texture with 10-11 segments. The fruit are juicy averaging 47% juice with an average weight of 110g. 'FairchildLS' matures in winter (late January) and holds its fruit quality characteristics through late March. Fruit from trees on Carrizo citrange rootstocks average 12.1-13.0% soluble solids and 0.85-1.17% acid in January increasing to 13.2-14.5% soluble solids with decreasing acid of 0.76-0.93% by mid-March at four trial locations. Fruit from trees on C-35 citrange rootstocks average 11.2-12.8% soluble solids and 0.94-1.23% acid in January increasing to 13.1-14.0% soluble solids with decreasing acid of 0.78-1.01% by mid-March. 'FairchildLS' averages 2.4 + 0.6 seeds per fruit in the presence of cross-pollination at all trial locations throughout California compared to 15-25 seeds per fruit for regular 'Fairchild'. Pollen of 'FairchildLS' has very low viability, therefore it has a very low likelihood of causing seeds in other citrus, particularly mandarins, when planted nearby. Fruit production for 'FairchildLS' begins in the third year after planting. Four-year-old trees averaged 62-88 lb, and five year old trees averaged 92-108 lbs. Alternate bearing can be a problem by years seven and eight (information from M.L Roose and T.E. Williams). Patent and/or propagation rights for 'Fairchild LS' mandarin are held by the Regents of the University of California. Budwood is available only to nurserymen who have a License Agreement for these cultivars."

The developers describe 'FairchildLS' as an "Early-mid season maturing (early - late December) irradiated selection of 'Fairchild' mandarin. Similar in many appearance and quality characteristics to 'Fairchild' with the exception of seed numbers (2.8 - 3.3 seeds/fruit compared to 15 - 30 seeds/fruit for 'Fairchild'). Fruit are richly flavored and sweet when mature (14 º brix) with a fairly smooth, orange rind. fruit are slightly more elongated than normal 'Fairchild'. Production appears to be somewhat less than 'Fairchild' under normal field cross-pollinated conditions. Alternate bears. Very good fruit quality in all climate zones." (Information from M Roose and T Williams, 06/28/2008). 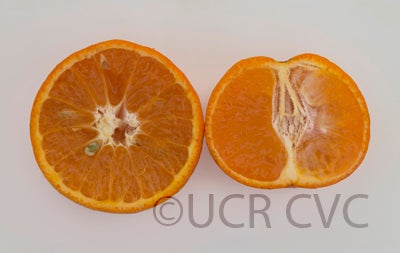 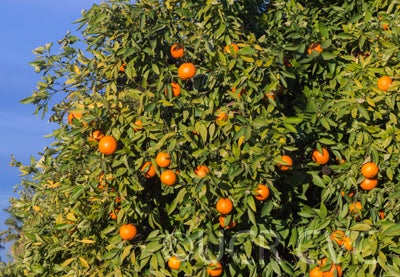 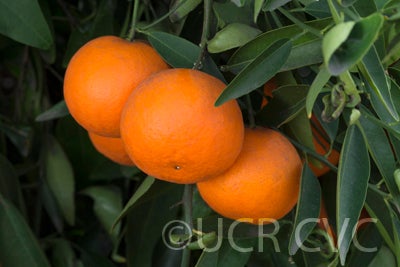