RRK: 'Gillemberg' navel matures 4 - 6 weeks after 'Palmer' and hangs well on the tree. The fruit is medium to large in size (larger than 'Palmer'), round to oblong in shape, with a pebbly, sometimes coarse rind, and a Palmer-like tight navel end. Fruit quality and yield on the parent tree is excellent. The foliage is denser and the leaves more tapered than 'Palmer'. (Description condensed from Burdette, 1995, and Saunt, 2000.)

In South Africa, 'Gillemberg' was multiplied starting in 1987 and was later shoot-tip-grafted and propagative material distributed through Outspan. Growers were encouraged to plant 'Gillemberg' on a "semi-commercial scale" in the Cape areas (Burdette et al, 1995). According to Burdette et al. (1995), rootstock choices for 'Gillemberg' would probably be the same as for 'Parent Washington' and 'Palmer'. Saunt (2000) further notes that 'Gillemberg' "has outstanding flavour even when grown on rough lemon rootstock in the cooler citrus-producing areas in South Africa." 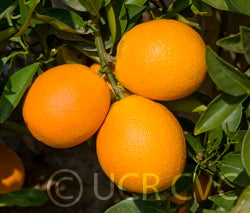 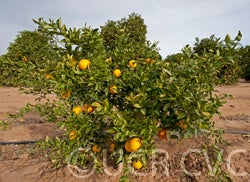