Received as budwood from the Citrus Clonal Protection Program in 2002.  This accession was named and introduced in Nagasaki, Japan in 1910, and received as seed by the USDA-ARS US Horticulture Research Station in Orlando, Florida, in 1965. This selection was made presumably during 1970-1980 in Florida, and was donated on April 29, 1998, from Florida DPI collection at ARB 11-17. DPI source was received from USDA Ahwanee Farm (AF66-34). AF source was in turn derived from Imokolee Farm (if-65-29) or same source as IF-65-29.

'Hirado buntan' originated as a chance seedling. The current accession, RCR 4122, is a pink-fleshed seedling selection of the standard 'Hirado buntan'.

This is a pink-fleshed selection of 'Hirado Buntan'. According to the Citrus Industry, Vol I, p 536 (1967 edition), "Standard" 'Hirado Buntan' fruit are large, oblate, seedy, with slightly depressions at both ends. Flesh color is yellow when mature [note: this refers to the "standard" 'Hirado Buntan']. The medium-thick rind is smooth, glossy, and tightly adherent. The flesh is light greenish-yellow, tender, and moderately juicy. The segments are numerous with thin but tough carpellary membranes. Flavor is pleasant with well balance sugars and acids but with a trace of bitterness. Maturation is medium-early and storability is regarded as good. The trees are vigorous and medium-large in stature, with large, thick, broadly winged leaves. It is more cold-tolerant than most pummelos. 'Hirado Buntan' is the second most popular pummelo in Japan (after 'Banpeiyu'). According to Saunt (Citrus Varieties of the World, 2000, p 104), the pink-fleshed selection from Florida is now the preferred choice for planting. Saunt regards this selection as being of the highest quality outside of the eastern regions of Asia and to be the equal of 'Djeroek Deleema Kopjor' ('Pomelit') from South Africa. Information from Florida DPI indicates that this pink-fleshed selection has large fruit that are sweet and juicy, with around to oblate shape. The season (in Florida) is stated to be November through March, and the trees are stated to be alternate-bearing. (RRK, 08/2006)

This variety originated as a chance seedling in Nagasaki Prefecture of Japan, was named and introduced about 1910, and is currently second in importance there." 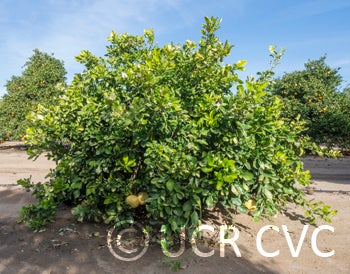 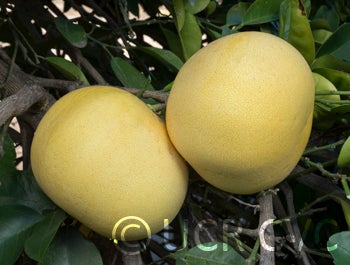