Parent unknown.Seed collected at DPI Arboretum from 7-11E. This DPI source was budded from USDA Orlando source H-830 = PI 410943. This was also received from the same source in 05/1994 and designated RRUT 20, but was discarded to reduce confusion in the database and that RRUT was inactivated.

RRK, 08/2006: This accession was introduced twice from the same source (12/1989 and 05/1994). Due to adminstrative issues, only the single accession number was given to both introductions. All current trees are derived from original (12/1989) introduction. Although these were seed introductions, the fruit and foliar morphology matches the published description (Winters, HF. 1976. Microcitus papuana, a new species from Papua New Guinea (Rutaceae). Baileya, 20(1):19-24. This accession is not the original introduction (PI 355305) but was ollected in the same area.

"Twigs minutely puberulous; leaves dimorphic, those on young seedlings greatly reduced cataphylls gradually merging into small, linear or elongate-elliptical leaves and finally into the normal foliage of the species; mature leaves more or less coriaceous, strongly veined, glabrous except in midrib near base; petioles short, wingless, finely pubescent, especially on the upper flattened side; spines slender, acute, single (or in pairs in M. inodora and M. maideniana) in the axils of the leaves; flowers small, 4-5-merous, stamens entirely free, ovary with 4-8 locules; ovules several, 4-8 or more in each locule; fruits round-ovoid or cylindric; pulp-vesicles noncoherent, slender-stalked, subglobose or ovoid (except in M. australis, in which they are elongate-fusiform, tapering above), filled with acid pulp having minute droplets of acrid oil aggregated along the axis; seeds small, ovate in outline; cotyledons hypogeous in germination.

This genus is obviously related to Citrus, from which it differs, however, in having dimorphic foliage, free stamens, an ovary with four to six (or eight) locules, and more or less coriaceous, strongly veined leaves.   Moreover, it is related to the highly specialized genus Eremocitrus, which also has dimorphic foliage and free stamens.   Eremocitrus, however, differs from Microcitrus in always having thick, coriaceous leaves with thick cuticle palisade tissue and stomata on both faces and an ovary with only three to five locules having only two ovules in each locule.

This ancestral type probably resembled somewhat M. warburgiana, the New Guinea species, which has small leaves and small, nearly spherical fruits.   From such an ancestral form, one line of evolution produced the so-called native orange, round lime, or Dooja (M. australis), that grows to a large tree and has subglobose fruits much larger than those of M. warburgiana, with long, slender, pointed, more or less twisted pulp-vesicles; another line of evolution culminated in M. inodora and M. maideniana, highly specialized forms showing adaptations to tropical rain forests, with large leaves and paired spines; a third line of evolution led to the small-leaved, somewhat xerophytic species M. australasica and M. garrowayi, both with long-ovoid or very elongate-cylindric fruits.

These remarkable citrus fruits are extremely interesting, in that they show how evolution has proceeded in regions isolated as Australia and New Guinea have been during the last twenty or thirty million years since they were cut off from all other land masses.  The evolution of other citrus fruits is not so easily followed, since Citrus, Fortunella, and Poncirus did not originate in regions that were geographically isolated in definitely dated geologic eras." 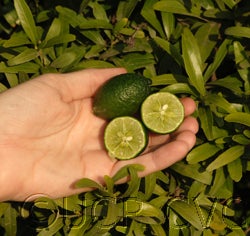 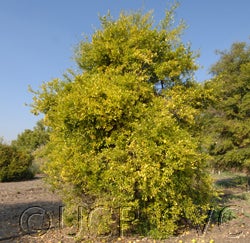 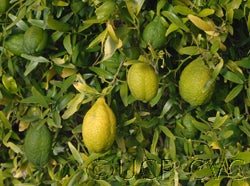 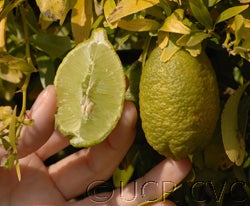 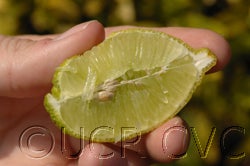