Received as seed from homeowner (Smith) of Moorpark, Ventura County, California, 1988. Smith Red Blood orange was received from the UCR Variety Collection 9-1-1998, trees planted in Lindcove Foundation Block 2001 and the first budwood went out to nurseries in January of 2004.

9/30/1988, MR: A single seed from a deep red colored fruit collected from one of two Valencia trees in Ventura County by homeowner. Fruit somewhat overmature. Looks like a blood orange, including an indentation at stylar end. This was the only fruit found so far. Nick Sakovich will check for more. Seed heat treated and 8-HQ. Homeowner is___ Smith. Trees to field were A,B,C. Maybe three seedlings from one seed." Homeowner believed neighbor was poisoning her tree and contacted the local Farm advisor. The tree is a vigorous grower and carries good crops of fruit. The fruit is of good size and flavor and is very low-seeded. As noted above, the rind frequently carries a heavy red blush and the flesh is heavily pigmented with anthocyanin. The fruit shape is somewhat variable, globose to avoid, with a depressed base, possibly due to juvenility of subject trees. Although the fruit is mature in late winter, it holds well into late spring, well past the season for conventional blood oranges. 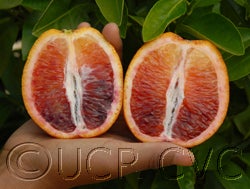 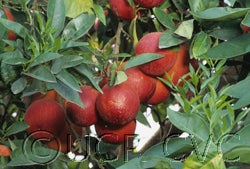