Budwood received 04/2000 by Tracy Kahn from Jim Patterson, Redlands, as referred by David Karp. The Patterson orchard is said to be a very old orchard in Redlands. Propagated for the Citrus Variety Collection in 04/2000 by Ottillia "Toots" Bier.

RRK: "Portugaise is the name employed in Algeria where this variety is commercially most important, but in Tunisia it is the old and highly reputed Maltaise Sanguine variety. Almost certainly a number of clones are involved which are indistinguishable in general, yet exhibit minor differences in growth habit and fruit form. In Tunisian usage, Portugaise is considered to be somewhat more upright in growth habit and with fruit of a slightly more pronounced oval form. There is a close resemblance between Maltaise Sanguine and the Sanguinella Moscata variety of Italy. There is general agreement as to the excellent eating quality and fragrance of this variety. However, it is highly variable and uncertain with respect to blood coloration development. Frequently external red pigmentation is not accompanied by internal coloration and in some growing areas both are lacking. The origin of this undoubtedly very old variety is unknown, but possibly it may have been the island of Malta. The Maltese Blood variety introduced into Florida from the Mediterranean many years ago seems likely to be a clone of this variety as does the Bloodred Malta of West Pakistan and Punjab, India. The Egyptian variety Beladi Blood, which is said to have been imported from Malta about 1830, almost certainly is Maltaise Sanguine." (Hodgson, 1967)

"An important, high quality semi-blood variety, the Maltaise Sanguine is of unknown origin, but Malta is most probable. It is grown extensively in Tunisian and to a lesser extent in Morocco. The tree is moderately vigorous but attains only medium size when mature and is of only average productivity with a tendency towards alternate bearing. Fruit is of medium size, slightly oval in shape, with a finely pebbled rind texture. External colour is predominantly orange but occasionally has the slightest of blushes. The rind often feels soft, is of medium thickness and is easily peeled. The flesh is well coloured but never more than moderately pigmented and often only very slightly so. It is, however, very tender and rag-free (like a Shamouti), extremely juicy and virtually seedless. The Tunisian Maltaise has outstanding flavour which is regarded by many, including myself, as being the finest quality of any non-navel orange; in France it is spoken of as the 'Queen of Oranges'. It is very sweet but with adequate acidity and has a particularly delicate flavour which, when combined with it tenderness, seedlessness and high juice content, forms the near ideal desert fruit. Maturing in late January and February, the fruit hangs only moderately well on the tree before losing quality but may be stored for a reasonable period post-harvest without significant loss in quality or condition. Most of Tunisia's production is in the Soliman district of Cape Breton to the south-east of Tunis and totals around 100,000 tons annually, a quarter of which is exported to France where its fine quality consistently earns significant premiums over the best Spanish navel oranges. Although probably very specific in its climatic requirements to fully attain its best quality, and despite producing fruit of only medium size, the Maltaise Sanguine has such outstanding flavour that it deserves to be evaluated on a broaderscale under conditions similar to those which exist in Tunisia." (Saunt, 2000) 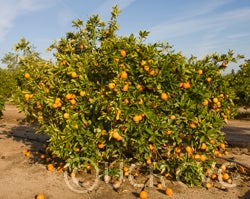 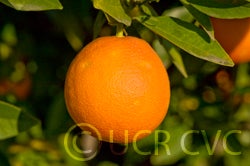