Rohde is a more recently imported navel orange selection from Australia.  This patented selection was first observed on the property of the McLaren Management Group at Iraak in North Eastern Victoria Australia. Found in the early 1980's.

Rohde is said to have more flavor than Lane Late in most months and a similar amount of juice and acid, but ahs a lower percent granulation problem late in the season.  Slightly oblong fruit in some seasons, usually round. It may have a slightly coarse or rough skin texture especially late in the season or when excessive amounts of fertilizer are applied, or when the crop is light. Fruit size is the same as Lane Late. It is likely to produce more fruit per hectare than Lane Late. All tristeza tolerant rootstocks can be used depending on soil type as for other oranges.

No longer commercially available in California. This accession no longer has an approved bud source. Please refer to the CCPP for information on another approved budsource or to start a reintroduction inquiry. THIS IS A PROPRIETARY CULTIVAR. 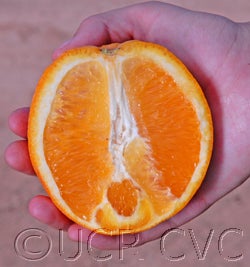 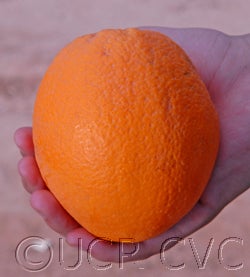