Received as budwood from A. Harty, New Zealand, date unknown.

"The English nurseryman, Thomas Rivers of Sawbridgeworth, imported this variety from the Azores Islands and catalogued it in 1865 under the name Excelsior (Coit, 1915).  About 1870, he provided trees to S. B. Parsons, a Long Island Nurseryman, and in 1876 he sent trees to A. B. Chapman of San Gabriel, California.  In the meantime, Parsons sold trees to E. H. Hart of Federal Point, Florida, where in 1877 the variety received the name Hart's Tardiff.  According to Webber (1943, p. 523), the trees received by Chapman were unlabeled and included several varieties, one of which proved to be late maturing and was provisionally called Rivers Late.  A few years later Chapman changed the name to Valencia Late at the suggestion of a Spanish visitor who pronounced it similar to a late-maturing variety in the region of Valencia.  It was not until several decades later that comparisons in California established the fact that these two indistinguishable varieties were identical and much later that this fact received recognition in Florida." 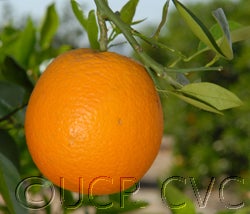 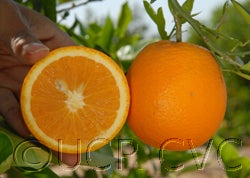