Received as budwood from A. Harty, New Zealand.

Reported to be a nucellar seedling selection of Owari from a cross made by W.T. Swingle in 1908.

"The Silverhill: A promising and apparently hardy strain of Satsuma orange", by Walter T. Swingle, January 3, 1931:  "In 1924, the temperature at Silverhill, Alabama, fell to 13 degrees on January 6, and to 14 degrees on January 7. The young trees of No. 7272 were defoliated but otherwise uninjured and by May of that year were fully leafed out and in good condition. Two freezes occurred in 1928, the lowest temperatures being 15 degrees on January 2 and 3, but little if any injury was sustained by these false hybrid trees beyond partial defoliation. Finally, in December, 1929, and January, 1930, all the trees (by this time of larger size and in full bearing) went through a disastrous series of freezes, with temperatures falling to 20 degrees on December 3, to 21 degrees on December 4, to 18 degrees on December 20, to 21 degrees on December 21, and to 19 degrees on December 24, followed after January 1, by warm weather for about two weeks. Then, on January 19, the temperature dropped to 16 degrees. The last severe freeze, following warm growing weather, caused great injury to ordinary Satsuma trees in this part of Alabama, but the false hybrid No. 7272 showed no injury beyond defoliation except in the case of a few trees that had been scale-infested and which were in a weakened condition when the freeze hit them.

Ordinary Owari Satsuma trees growing alongside in the field and planted at the same time were severely injured by all of the freezes mentioned, so there can be no doubt that this false-hybrid is distinctly hardier than the ordinary Satusma varieties.

Since the hardiness of this false hybrid (CPB No. 7272) was first brought clearly to light at Silverhill, Alabama, it is proposed to name it the Silverhill Satsuma.

The Silverhill Satsuma produces fruit of the same size and appearance as that of the Owari variety. The fruit ripens possibly a few days earlier, but on the other hand, keeps rather better than the Owari. However, it can be picked, sized, packed and marketed along with the main crop of the Owari without difficulity. The Silverhill tree shows an upright habit of growth when young, in contrast with the more drooping habit of the Owari. It makes a large tree, capable of carrying a large crop, when in full bearing.

The Silverhill Satsuma tree grows faster than the Owari Satsuma, is rather more subject to the attacks of the scab fungus, Sphaceloma fawcetti, Jenkins, and is also somewhat later in coming into full bearing than Owari. Instead of beginning to fruit at four years of age, as the Owari does, the Silverhill trees were about six years old before they produced a crop. The susceptibility to scab resulting from rank vegetative growth, probably contributes to this delayed fruiting, and effective control of scab, secured by one of two additional sprayings with Bordeaux minture, may perhaps result in earlier fruit production.

Irrespective of the drawbacks noted, it is believed that on account of its hardiness, the Silverhill Satsuma is promising enough to warrant its being tested on a small scale by the Satsuma growers of the Gulf Coast region."

Tree very vigorous (for satsuma), more upright than most others; productive; markedly cold-resistant.

Silverhill is a nucellar seedling selection of Owari from a cross made by W. T. Swingle of the U.S. Department of Agriculture in Florida about 1908.  The variety was named and introduced about 1931.  In collections in California, it is indistinguishable from the Frost Owari derived at the Citrus Research Center, Riverside, California, and almost certainly they are identical.  They constitute what are considered to be the best clones currently available in the United States.

Silverhill has been tested in Japan, where the above characterization was taken to permit direct comparison with other varieties.  It is recommended for planting in Japan as a promising, early shipping variety of Unshû.

Another nucellar selection, which so closely resembles Silverhill that it is virtually indistinguishable, is Tanikawa Unshû, which originated as a nucellar seedling in the breeding program of the Horticultural Research Station at Okitsu about 1920 and was named for its originator, T. Tanikawa.  The only differences reported are a somewhat lower average sugar content in the fruit and slightly higher average yield to date.  Like Silverhill, it is recommended as an early shipping variety." 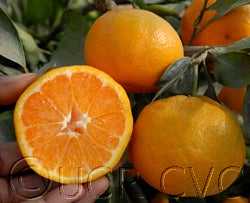 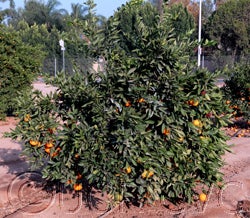