Recorded as having been received as budwood from Nordman Ornamental Nursery of DeLand, Florida, although the nursery involved in the origination and propagation of the variety was Ben J. Nordmann, Inc., also of DeLand. (The two businesses were operated by cousins. Some of the family, including George Nordmann, after whom the variety was named, spelled their names “Nordmann,” with two final “n”s; others family members spelled it “Nordman,” said George’s younger brother, William [Bill] Nordmann in 2003.)

George Otto Nordmann discovered the variety now known as ‘Nordmann Seedless’ on a Nagami seedling tree planted in 1965 in DeLand, about 20 miles southwest of Daytona Beach. This was one of many citrus seedlings which he grew in order to obtain virus-free budwood. “He grew seedlings of Nagami, and when they fruited he saw that one of the trees had fruit that was seedless,” said Bill Nordmann in 2003.

This original tree subsequently froze, but before its demise, George took budwood from it and budded it onto four Carrizo citranges; Bill planted the trees at the entrance to the Ben. J. Nordmann nursery, at 1600 West Plymouth Avenue in DeLand. The correct name of the variety, as first published by Alfred R. Loeblich III in 1994, is ‘Nordmann Seedless’ (Loeblich, 1994).

Ben. J. Nordmann nursery sold a limited number of Nordmann Seedless trees as garden plants. The nursery itself was sold in 1997. As of February 2009, three of the second-generation trees at the old nursery grounds were still alive. (Bill Nordmann, Feb. 2009).

‘Nordman Seedless’ kumquat was first released by the California Clonal Protection Program in June of 1999 (David Gumpf, Jan. 2002). It was never patented, and it was never commercialized in Florida. In recent years budwood has not been available from the Florida Bureau of Citrus Budwood Registration (Michael Kesinger, Jan. 2003).

Some years after discovering his namesake kumquat, George Nordmann moved to Washington State and then to Andrews, North Carolina, where he lived from 1973 to 2008, and owned a health food store. He made national news in 1998 when his friend and neighbor, Eric Robert Rudolph, the infamous Atlanta Olympics bomber, sought George Nordmann’s help while Rudolph was a fugitive. Nordmann agreed at first, but reconsidered. Rudolph then broke into Nordmann's home in Andrews and took food as well as his old pickup, leaving $500 at his home as payment. George Nordmann died Dec. 20, 2008, at age 81. (from contemporary news reports, and converations with Bill Nordmann, Feb. 2009)

C-35 citrange. A tree on Schaub Rough lemon appears to have incompatibility issues.

The skin may be a little thinner than in Nagami, and postharvest life may be slightly shorter, both of which may perhaps be caused by the absence of plant hormones from the seeds.

The tree is similar to the standard Nagami kumquat, small to medium in size with a fine, dense texture. The tree becomes semi-dormant in winter, making it relatively cold-hardy. Flowering season is in summer and the fruit matures in winter, holding well on the tree. The fruits can be up to two inches long, three-quarters of an inch wide, and frequently hang in ornamental clusters.

On seedlessness in kumquats: Kumquats “have never been popular for [marmalades and jellies and candied fruits], probably owing to their seediness, wrote Herbert J. Webber in 1943. “If a seedless variety were developed, an extensive preserving and candying industry could be easily developed.”

In addition to ‘Nordman Seedless’, two partially or mostly seedless varieties have been developed and propagated in Texas, ‘Seedless Nameiwa’ and ‘Nameiwa #1’. (Loeblich, 1994).

Japanese breeders have developed a seedless kumquat cultivar named ‘Puchimaru’ which has the shape of Nagami, but is sweeter, like Meiwa. Several tetraploid kumquats exist is the United States and Asia, so it would be possible for breeders to create more seedless triploid varieties. (Yoshida et al., 2003) 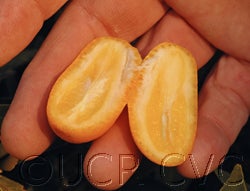 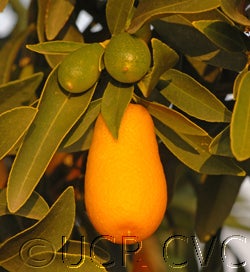 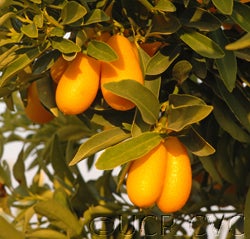 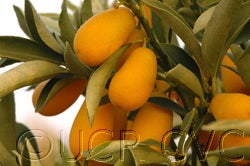 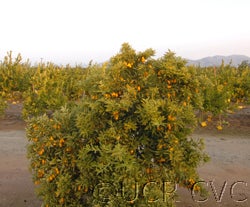