"Blanco's original description of this plant follows (translated from the Spanish): Trunk with large solitary spines.   Leaves alternate, ternate.   Leaflets lanceolate, emarginate, shining, the central one largest.   Calyx with 5 teeth.   Corolla with 5 thick linear petals, much longer than the calyx.   Stamens 10.   Ovary cylindrical.   Style and stigma thick.   Fruit oblong (3 in. [7.6 cm] long and more than 2 in. [5 cm] thick) with protuberances and confused furrows on the surface, with about 10 locules and some seeds in each, obovate compressed, ending in a tuft of wool.   Tree 8-10 yards high, [trunk] not very thick.   It is used for pillars in houses.   The fruit is aromatic and the juice sour.   It is like a lemon and is used for 'cola.'   I saw it on Mt. Arayat.   Flowers in Dec.   [Spanish name] Mala cabuyao, Phil. name Tabog."

This original description may be supplemented from herbarium material from Luzon Island, P.I., and from living plants in the greenhouses of the U.S. Department of Agriculture as follows: Small or medium-sized tree; twigs angled when young and finely pubescent, soon becoming terete and losing pubescence; spines finely pubescent, 1 or 2 in the axils of the leaves, especially on young vigorous shoots (flowering twigs frequently spineless); leaves 3-foliolate, terminal leaflets 8-12 X 3-5 cm, oblanceolate, bluntly pointed or sometimes rounded at the apex, gradually narrowed into an acuminate, finely pubescent base which is not, however, differentiated into a petiolule, although winged for 1/2-1 cm and articulated by means of a pulvinus-like base, lateral leaflets oval or obovate, 2.5-5 X 1.2-2.5 cm, 1/5-1/2 the length of the terminal one (never more than half as long as the terminal one!), bluntly cuneate and pubescent at base with a very short pulvinoid petiolule, 1-1.5 mm long, not articulated with the blade, but distinctly articulated with the petiole which is extraordinarily variable in length (0.5-5 cm), flattened above, finely pubescent, very narrowly winged; flowers solitary or in clusters in the axils of the leaves, or sometimes terminal on short twigs leafy at the base; buds long, elliptical, 6-7 X 3-3.5 mm; calyx 2.5-3.5 X 1.5-2 mm, cup-shaped, with 5 blunt lobes; corolla white, petals 5, 12-14 X 3-3.5 mm (in dried specimens); stamens 10, filaments filiform, glabrous, anthers linear, 3.5-4 X 1 mm; pistil 7.5-9 mm long, ovary short-stalked, obovate, pilose with stiff, yellowish-gray, bristling hairs, style slender, 0.6-0.7 mm diam., sparingly hairy (hairs like those on the ovary), twice as long as the ovary, longitudinally furrowed (showing 8-10 furrows), stigma 1.3-1.6 mm diam., flattened like a mushroom, apparently faintly 10-furrowed; young fruit showing the persistent style; mature fruit oblong-ovoid, 5-10 X 3-6 cm, locules 8-10; segment wall thickened, containing numerous large, elliptical mucilage glands; seeds woolly, several in each locule, surrounded by glutinous pulp; peel leathery with long, pointed, radially arranged oil glands.

The fruit of Swinglea shows remarkable structures, here called tentatively mucilage glands, that seem to arise lysigenously, just as do the oil glands of the peel, leaves, et cetera.   These ellipsoid lysigenous mucilage glands arise rather close together in the thick locule walls, both dorsal and radial.   Those on the outer portions of the radial walls slant obliquely away from the middle of the locule walls to the membrane that lines the narrow seed cavity at an angle of about 45° to the radial walls.   Consequently the mucilage glands in the radial walls of adjoining locules are disposed at right angles to one another in a sort of herringbone pattern; at any rate they are thus disposed in young fruits when all the glands in the locule walls are nearly equal in size before the growing seeds have more or less displaced and distorted the glands nearest the axis of the fruit.

It is not impossible that similar, less evident, structures will be found in the thick radial locule walls of Aegle.   The thin (2 mm) radial locule walls of Aeglopsis show numerous but very different glands that secrete mucilage, as described by Chevalier in Swingle (1912b, p. 241, pl. 3, fig. 3).   At any rate the mucilage glands of Swinglea are of such large size (5 to 10 by 2 to 3.5 mm) that they cannot be overlooked.

The floral anatomy of Swinglea was found by Tillson (1938, pp. 22, 30, fig. 46; also Tillson and Bamford, 1938, pp. 789, 790) to be markedly different from that of the other genera of the Hard-Shelled Citroid Fruit Trees of the subtribe Balsamocitrinae in that the lateral sepal bundles are fused as they leave the axis with the petal midrib bundles.   This remarkable condition has also been found in the five genera of the Primitive Citrus Fruit Trees, in the species of Citrus belonging to the subgenus Citrus, and in Paramignya and Luvunga, all belonging to the tribe Citreae.

The tabog, as this species is called in the Philippines, is a small thorny tree widely distributed in Luzon Island.   It was found impossible to top-graft Citrus scions on tabog trees growing out of doors at Manila, P.I., but in the Washington, D.C., greenhouses of the U.S. Department of Agriculture vigorous young seedling tabog plants took Citrus buds very well, and these buds continued to grow vigorously and to flower and fruit freely for many years.

From the extraordinary energy of root growth of the tabog observed in greenhouse sections kept at very high temperatures (up to 32.2° C, or 90° F), it seems probable that the tabog requires higher soil temperature during the winter than is found in the citrus-growing regions of the mainland of the United States except in extreme southeastern Florida, where the tabog has made a very good growth in the sandy-loam and porous-limestone soil characteristic of the Miami region and has withstood temperatures as low a 35° F without loss of its leaves.   In the Panama Canal Zone in the Experiment Gardens at Summit, the tabog was reported by J. E. Higgins to make a strong tree that fruited freely and yielded abundant viable seeds.   Since World War I, the tabog has been introduced to many countries in tropical Central and South America, where it grows vigorously at altitudes of 1,500 meters or less.

This species should certainly be given serious consideration as a rootstock for Citrus to be grown in greenhouses where the temperature is warm all winter, and it should also be tested in tropical regions having high soil temperatures throughout the year." 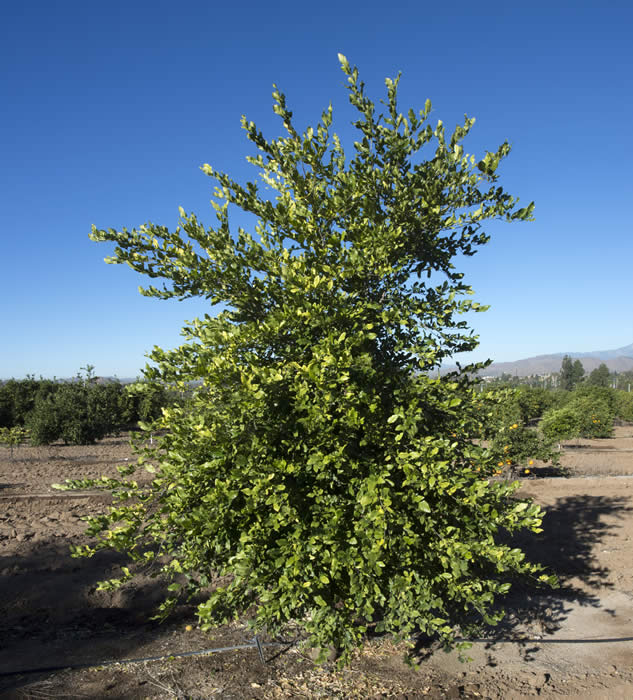 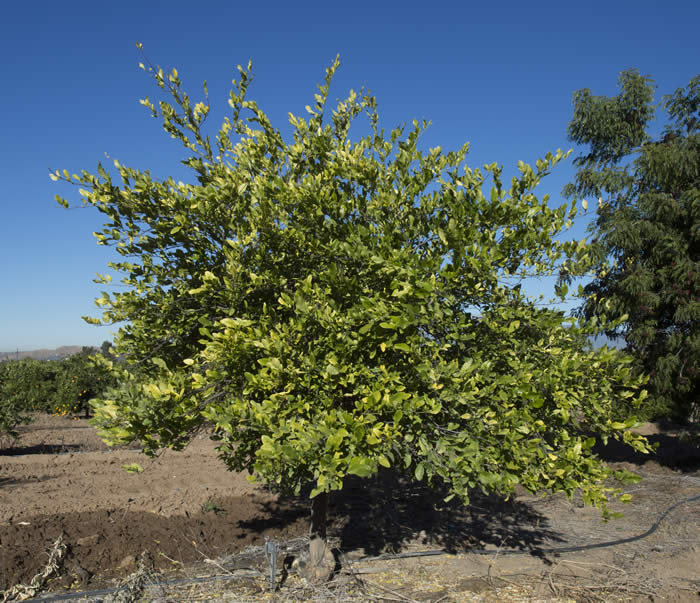