Season of fruiting at Riverside

"Fruit globose or obovoid, sometimes slightly stipulate at base, almost always depressed at the top, as large as a big orange (6-8 cm diam. when mature), wrinkled on the surface, sometimes tuberculous, without odorous glands.

"Segments 8 (!) with smooth walls (not covered with fleshy hairs).   Each segment contains numerous seeds irregularly arranged in 2 or 3 rows, inserted in the placenta, axillary and in orderly arrangement, tegument whitish, parchment-like."

Fresh flowers of Afraegle paniculata from a tree grown in the citrus greenhouse of the former Bureau of Plant Industry at Washington, D.C. , were compared on July 10, 1937, with fresh flowers of A. gabonensis grown in the same greenhouse.   They showed the following points of difference: Inflorescences of A. paniculata much longer, but pedicels slightly shorter (3 to 4 mm long); flowers about the same size as those of A. gabonensis; calyx not flat and discoid but cup-shaped with 3 to 5 clearly marked, very bluntly pointed lobes, finely ciliate at the apex; petals very similar to those of A. gabonensis; stamens similar but in A. paniculata nearly four times as numerous as the petals (often one or two short of this number), whereas in A. gabonensis three times as many (or a few short); disk smaller, about 3.5 to 4.5 mm wide and 1.5 mm high, pea-green instead of yellowish-green, as in A. gabonensis.

This tree, which reaches a height of 15 meters, is often planted by the natives in their villages in Dahomey and Nigeria.   The seeds are said to yield an edible oil and the leaves are sometimes macerated and added to the water used for bathing.   In the United States, this species grows well in the greenhouses of the U.S. Department of Agriculture and sometimes flowers, but so far has not borne fruit.   In the quasi-tropical coastal region near Miami, Florida, which has an unusual type of soil consisting largely of porous-limestone rock intermingled with fine sand or very sandy loam, this species, when well fertilized, makes extraordinary growth—probably ten times as fast as in the Washington greenhouse.   A tree growing near Coconut Grove, when only four or five years old and only 5 feet (1.6 to 1.8 m) high, had a lateral spread of 15 to 20 feet (4.5 to 6 m).   As it grew older, this tree became much taller but still had long branches.   Afraegle paniculata grows in the Miami region much more rapidly than Aeglopsis chevalieri (another vigorous but dwarfish West African Hard-Shelled Citroid Fruit Tree), and is being tested as a rootstock for the bael fruit Aegle marmelos, a species which often does not grow well on its own roots." 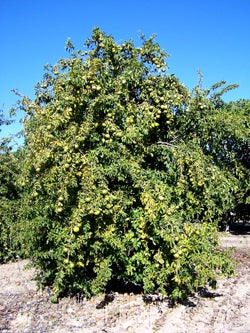 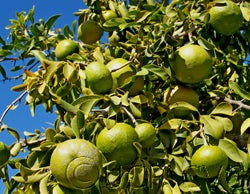 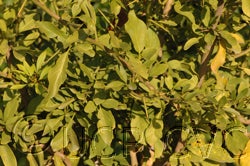