Received as budwood from Willits and Newcomb Nursery, Arvin, Calif., 1996.

10/15/2021, Janet Robertson Duncan: "Roy Robertson was my grand-uncle. My grandfather and his brother Warren were Roy's business partners when the Robertson navel was developed in Riverside, California. My dad, William, went to UC Berkeley and never moved back to Riverside so I grew up in San Francisco. Roy developed and patented the Robertson navel and later sold the rights to Armstrong during the depression. I remember the delicious scent of heaven when we would visit at Easter and drive through the blooming trees. I have a dwarf Robertson orange next to my deck which continues to produce delicious oranges that I can leave on the tree until I want them. It is 30+ years old in a container.”

Please see the excerpt below from "The Robertson Strain of the Washington Navel Orange" by A.D. Shamel and C.S. Pomeroy in the Journal of Heredity, Volume 26, Issue 5, May 1935, Pages 218–222.

"The attention of the writers was first called to the Robertson Strain of the Washington Navel Orange on May 29, 1933, by John E. Moore, an experienced citrus nurserymen and grower, who has charge of the orchard in which progeny trees of this strain are being grown. The orchard, which belongs to the estate of his father-in-law, Warren B. Robertson is in the Alvord Section of the Riverside citrus district about midway between Arlington and Corona and just east of Magnolia Avenue on the slope of the western foothills of Arlington mountain. The history of the limb sport from which his strain originated, as described by Mr. Moore (personal letter, July 12, 1933): During the spring of 1925, Mr. Robertson’s brother, Roy, was picking oranges in what is known as the old Benson grove of Washington Navel that is located on Walnut Road near Redlands, California, and near the top of one the trees he found a limb bearing an unusually heavy quantity of fruit. He examined this fruit and noticed that it was somewhat different from the other fruit in the tree, having a larger size and smoother texture. He marked this limb and watched it for a period of two years and each year it bore a larger quality of fruit of better commercial quality of fruit than that borne by the other limb on these trees.  Warren B. Robertson visited the Benson grove during June 1925, and his brother showed him the abnormal limb. He cut budwood from it, and top-worked one limb of a seven-year-old Mediterranean sweet orange tree in his grove at Alvord with the buds. A record for two years was kept of this budded limb during which time the fruit proved to have the same texture and characteristics as that on the original sport lime. At that time Mr. Robertson saw that it was earlier than the ordinary Washington navels in his grove. He decided that he had found a new variety and gave it the name of “Robertson Cluster Navel” from the fact that it tend s to bear its fruit clusters. It now seems desirable to change this name to Robertson Navel.”

"Fruit virtually indistinguishable from Washington except for medium-large size, slightly lower quality, and earlier maturity, which is usually ten days to two weeks. While maturing about the same time as Thomson, quality is better and fruit is retained much longer on tree. Because fruit is often borne in tight clusters, its shape is sometimes slightly distorted and exhibits flat contact surfaces.

The heat resistance and associated high-yielding behavior of the Robertson navel orange appear to relate to the fact that, although it blossoms at about the same time as other varieties the young fruits develop more rapidly and pass through the fruit-setting phase earlier. The fruits thus escape the severe dropping associated with the heat and dryness normally characteristic of the later fruit-setting period of other varieties (Coit and Hodgson, 1919).

Robertson originated as a limb sport in an old Washington navel tree in an orchard near Redlands, California, where it was found by Roy Robertson in 1925. It was patented (U.S. Plant Patent No. 126) by Armstrong Nurseries of Ontario, California, and introducer to the trade in 1936. Although planted and topworked to some extent, it has not become commercially important in California or Arizona, nor apparently elsewhere. However, because of its small tree size and early and high productivity, it is popular as a dooryard or container-grown patio tree." 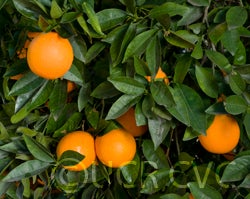