EMN: A rootstock type mandarin. To be processed through CCPP for the variety collection, Lindcove, and Bot. & Pl. Sci. plant breeding.

01/2005, Bill Bitters: "In Volume 74 (#4) February 1989 of Citrograph magazine, Dr. D.J. Hutchinson of the U.S.D.A. Department of Agriculture, 2120 Camden Road, Orlando, Florida 32803, reported on a new Florida citrus rootstock release. The rootstock cultivar in question is known as the Sun Chu Sha mandarin, or better yet, as the Sun-Chu-Sha-Kat.  This mandarin was introduced to the United States in 1921 from Szwai, Kwangtung Province, China through the efforts of George Weidman Groff, by way of O.A. Reinking of the College of Agriculture, Los Banos, Philippines Islands.  The cultivar has a plant inventory (P.I.) number of 109735 and a crop and plant breeding (C.P.B.) number of 15106 for future identification purposes. A nucellar seedling of this introduction (it is highly nucellar) was the source of the seed for the trees in the rootstock trial reported on by Dr. Hutchinson in the Citrograph article. Hutchinson reported that the Sun Chu Sha has a high survival rate to citrus blight (young tree decline or Y.T.D.), and was also tolerant to Tristeza and to Phytophthora parasitica (gummosis).  Citrus trees on this rootstock tended to accumulate magnesium when grown on magnesium deficient soils in Florida.  In other tests conducted by the U.S.D.A. agricultural research department, similar rootstock trials on calcareous soils in Texas established that the Sun Chu Sha was a satisfactory rootstock for grapefruit, mandarins hybrids, and sweet orange. However, lower yields were reported for the mandarin hybrids on the Sun Chu Sha Kat than on similar trees on sour orange rootstock.

Such results cannot help but draw the attention of Florida citrus growers to this rootstock and also attract the interest of citrus growers in Texas and other citrus growing areas about the world.  However, Dr. Hutchinson provides no description of the Sun-Chu-Sha-Kat, and nothing on its origin, spread and its taxonomic relationship.  Also, there is no reference to its use as a rootstock in other citrus areas.  Perhaps he didn’t know, or perhaps he felt it was not essential to the release of the rootstock.

The senior author feels that this information is important, and that the cultivar is synonymous, and its rootstock use (or trials) elsewhere can contribute to a better knowledge and understanding of this rootstock.  Much of the information the authors presents is generally unknown, or unavailable elsewhere.

The Sun-Chu-Sha-Kat is an ancient Chinese cultivar. It was probably first described in any detail by Han-yen-Chih on page 21 of the English translation of his monograph called the “Chu Lu” published in 1178 A.D.  Han-yen-Chih doesn’t provide much information about the cultivar except to say it is a small fruit with a very delicious taste and tender flesh (actually, the fruit is quite tart, much like Sunki, Shekwasha, Cleopatra, and other small acid mandarins).  Han-yen-Chih states that the color of the rind is a deep red and that the tree grows well on sandy soils—which Hutchinson found out in Florida.  This cultivar is not only common in China, but also in Japan and Assam. T. Tanaka in his “Species Problems in Citrus” published in 1954 refers to this variety as the “Kobeni-mikan” (“beni” in Japanese meaning red) and he taxonomically refers to it as Citrus erythrosa (“erythro” meaning red, as in erythrocyte, a red blood cell).  The cultivar is taxonomically placed in T. Tanaka’s Acrumen-Microacrumen-Citidora-Microcarpa-Angrestifolia grouping.  Such a designation to many readers is confusing and difficult to remember, but more simply it would be in W.T. Swingles (1948) citrus classification scheme as Citrus reticulata var. austere; along with many other non-commerical, small-fruited, generally acid, seedy mandarins like, Cleopatra, Sunki, Shekwarhe, Kinokuni, Girimikan, and others.

One of the key identification characters of the Sun-Chu-Sha-Kat is the very bright reddish-orange color of the rind. But some confusion developed in the Philippines when another cultivar with the same characteristics and displaying some rootstock promise, was distinguished by still another synonym, the ‘Calamandarin’. Some would be taxonomists blithely predicted it was probably a hybrid between the calamondin (C. madurensis—and in the Phippine called the calamonding) and a mandarin.  But such was not the case—and hence—the ‘rest of the story’.

The confusion regarding the cultivar arose during World War II and the subsequent occupation of the Philippinis by the Japanese military.  All records and most of the trees existing then in the Philippine citrus variety collection at the Lipa Experiment Station were destroyed by the Japanese. About 1953, Mr. P.A. Rodrigo, an administrator with the Bureau of Plant Industry in Manila, P.I., visited the University of California Citrus Experiment Station at Riverside, California.  In a discussion of the senior author with Mr. Rodrigo, the senior author was informed that the Bureau of Plant Industry was testing a new citrus cultivar as a rootstock in the Philippines.  He called the cultivar the “Calamandarin”, but could not supply any additional information on its identity.  Mr. Rodrigo kindly supplied the Citrus Experiment Station at Riverside in 1954 and several selected seedlings became the C.E.S. accession number 3073.  No references to the cultivar.

The confusion in the Philippines was that Tanaka had given the name of Citrus erythrosa to the Sun-Chu-Sha-Kat—the vernacular (common) name was “Kobeni-mikan”. The Cleopatra mandarin—Tanaka’s Citrus reshni was somewhat similar in appearance, and the vernacular name was “obeni-mikan”. If you didn’t know Japanese—you could get into trouble!

The Sun-Chu-Sha-Kat resistance to Tristeza as a rootstock was tested at the Irvine South Coast Field Station. The inoculated trees showed no reaction to Tristeza. A rootstock planting for the Lindcove Field Station included the Sun-Chu-Sha-Kat. The young trees on that rootstock were inoculated with nematodes to determine its tolerance to the citrus nematode. This information is not available. 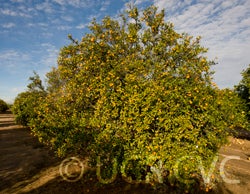 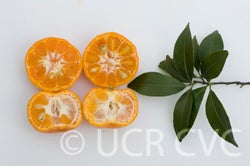 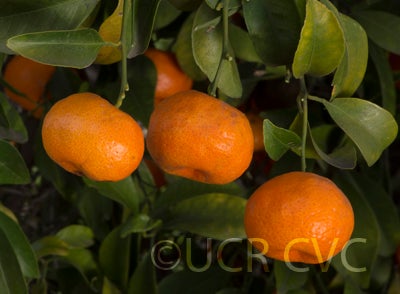 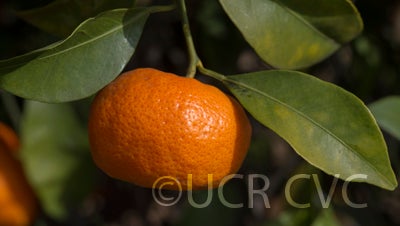