Received as seed from Morocco (sent by Ray Copeland), 1987.

EMN, 12/1989: Comments from letter from Ray Copeland: "The Sanguina Doblefina I sent in is probably the described Doblefina in Volume I, TCI. However, based on your description of the nucellar Doblefina I would say that some difference exists. The fruit on the tree from which I took the buds was quite high in peel color, showing good blood red color on all fruit. The internal color was moderate to none depending on fruit location on the tree. I believe for the U.S. market that this fruit would not be readily acceptable as a blood orange

Tree small and somewhat lacking in vigor, spreading and open in growth habit; foliage sparser and lighter green than most.  An early and heavy bearer.

Aside from its short season, lack of juiciness, and other faults, the Doblefina variety is highly variable and uncertain with respect to development and intensity of the blood coloration, which is often deficient or lacking.  When well developed, however, the fruit is attractive.

Of unknown Spanish origin, Doblefina was for many decades the principal blood orange variety in Spain and was favorably known in European markets.  It has been losing ground for some years, however, to other varieties of better color and richer flavor, particularly its derivative, Spanish Sanguinelli.  It is of interest to note that three blood orange varieties Entrefina, Doublefine Ameliorée, and Spanish Sanguinelli have originated as budsports from Doblefina." 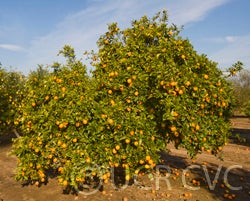 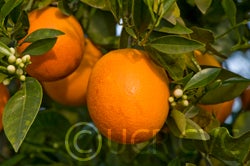 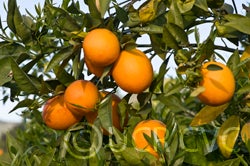