Received as budwood from Japan, 1984.

Original import had tristeza, eliminated by thermotherapy. W.P. Bitters says this is a selection out of Iyo; see TCI, Vol. I, pp 531. Citrograph 72(2): 29-30, 32, Dec. 1986; Iyokan was found in 1886 in a citrus orchard in Yamaguchi Prefecture (Japan) and was first introduced into Ehime Prefecture, which was formerly called Iyo. It is apparently a tangor. The fruit are medium large (200-300g), can be easily peeled, and are very fragrant. The segment membrane is not as thick as that of Natsumikan of Hassaku, but it is difficult to eat unless peeled. An early-maturing mutant, Miyauchi Iyokan (this accession) was found in 1952, and since then the plantings have been increasing. The fruit of Miyauchi have a thin skin and are seedless. Their eating quality is much better than that of fruit of the common strain. In 1980, another mutant was found and named Ohtani Iyokan. Ohtani fruit have a smooth, reddish-colored skin and are very attractive. 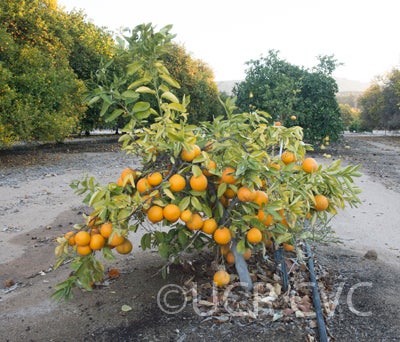 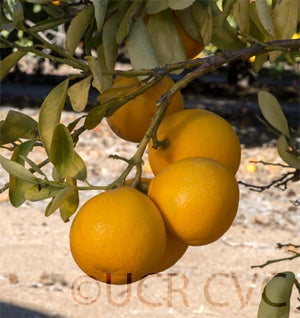