Received as seed by Dr. Bill Bitters from Japan, 1984.

Parents unknown. Believed to be a hybrid of papeda and sour orange. From China, but most popular in Japan.

11/2009, TJS: "Kabosu is said to have originated as a chance seedling that became established in the Oita Prefecture of Japan, located on the northeastern coast of the island of Kyüshü (Tanaka, 1981). There are many uses for the fruits, the most popular being in the creation of vinegars and marmalades, as a substitute for lemon on fish, and in soups, and for decorative purposes (Bitters, 1963). Bitters also described the use of the dried peel of Kabosu being burned as a mosquito repellant. The trees also make a useful dooryard ornamental.

Kabosu fruit was also formally evaluated in September and October from 2003 through 2007 at Riverside, Calif. Slightly larger than Yuzu, the average fruit size has a mean width of 5.3 cm (2.1 inches) and a height of 5.2 cm (2.0 inches), giving an average height-to-width aspect ratio of 0.98 and a more rounded shaped. Kabosu has a mean weight per fruit of 71.2 grams (2.51 ounces). Color break for Kabosu occurs between the first and third week of September. The rind texture is slightly pebbly with a mean thickness of 4.2 mm (.17 inches). The number of seeds per fruit averages 17.2, higher than Sudachi, but lower than Yuzu. The mean juice weight is 20.2 grams (0.71 ounces) and the average juice content is 28.2%, slightly higher than Yuzu, but lower than Sudachi. The juice weight and juice content increased during the sampling dates. The internal flesh color of Kabosu in the green stage ranges from light-yellow to dark-yellow. Kabosu tends to be the least acidic of the three acid types with an average of 3.2% citric acid.

Kabosu trees have a dense, spreading habit of moderate vigor. Trees that are 20 years old on Carrizo and C-35 citrange rootstocks are approximately 10 feet tall with no indications of rootstock-scion incompatibility. Thorns up to 5 mm in length are present in each leaf axil, but not present on every branch. Leaves are elliptical in shape, with a medium-winged petiole."

8/1989, WPB: Original import had tristeza, eliminated by thermotherapy. Kabosu is grown on a small commercial scale and is used as a condiment like lemon juice would be used here in California.

12/19/2010, RRK: 'Kabosu' originated as a spontaneous mutation of standard 'Yuzu' in the Oita Prefecture of Japan. The green-stage fruits have been used as acid citrus for flavoring in cooking and this has resulted in the creation of a small local citrus industry. RAPD markers were able to distinguish 'Kabosu' from various other 'Yuzu'-like fruits but did not provide any further insights into its origins.

"This variety is reported to be virtually indistinguishable from Zadaidai except that the calyx is normal and not large, fleshy, and distinctive.

Both Zadaidai and Kabusu are grown primarily as ornamentals in Japan and the fruits are used for decorative purposes and in the preparation of marmalade and vinegar." 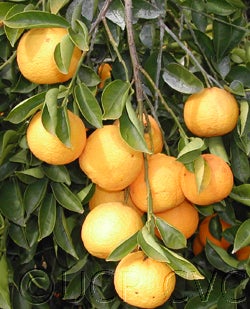 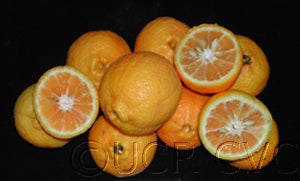 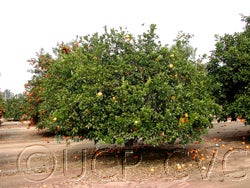 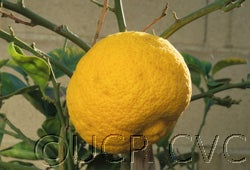