Somewhat everbearing, mainly in winter (earlier in hot climates such as southern Florida).

1985, EMN: The tree from which buds were taken was in full bearing and was one of an acre of limes. Buds cut by Mertz, Barrett, and Milliken.

The origin of the Tahiti or Persian lime is unknown, and its history is obscure.  The name Tahiti arises from the fact that this type of lime was introduced in California from Tahiti sometime during the period of 1850 to 1880.  As the Persian lime, it was introduced into Australia as early as 1824 (Bowman, 1955), possibly from Brazil, since it is mentioned in connection with the Celeta (Seleta) and Bahia orange varieties of that country.  The origin of the name Persian is unknown, however, although it seems likely that this fruit came to the Mediterranean area via Persia as did the citron.  Currently, it is not to be found in Persia, however (Chapot, 1965b).  The Sakhesli lime of the island of Djerba (Tunisia) is clearly of the same type and has been grown there for a long time, presumably centuries.  H. Chapot, the distinguished French citrus systematist, reports that he has also seen old trees of this fruit in Algeria and that the name Sakhesli means "from Sakhos," an Arabic name for the island of Chios (Greece).

While the only commercial variety of the Tahiti lime apparently produces no viable pollen and is normally seedless, Reece and Childs (1962) succeeded in obtaining 250 seeds from a commercial canning plant in Florida from which 140 seedlings were planted in an orchard and 77 survived and ultimately fruited.  A high degree of monoembryony is indicated as only two seedlings proved to be indistinguishable from the parent clone.  The remaining seedlings exhibited a very wide range in species characters, but approximately 60 per cent were predominantly citron, lemon, or seedy acid lime.  From these data, Reece and Childs concluded that this lime is clearly of hybrid origin, that one parent is obviously the common acid lime, and that the other is either lemon or citron, but probably the latter.  It is interesting that they were unable to observe more than 18 chromosomes, the normal diploid number for the genus, whereas Bacchi (1940) reported this lime as triploid in genetic constitution.

While further study will be required to make certain of the facts, it appears that there are presently several horticultural clones of Tahiti or Persian lime, only one of which is commercially important." 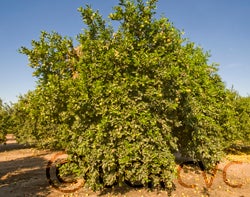 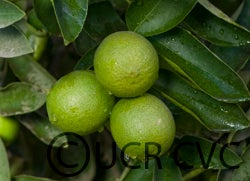