Received as budwood from Puerto Rico via Glenn Dale  at the request of W.P. Bitters, 1983.

3/10/1988, EMN: Dr. Bitters suggests that this might be a pummelo-orange hybrid instead of a grapefruit-orange hybrid; but he is not sure, so we will keep it in the grapefruit hybrid group for now.

3/11/1988, EMN: The reason Dr. Bitters thinks this may not be a grapefruit- sweet orange hybrid is because it is monoembryonic and both grapefruit and sweet orange are highly polyembryonic; therefore: Chironja should be more likely a pummelo-orange hybrid, maybe, perhaps, etc. etc.

Chironja recently came to notice in Puerto Rico and exhibits resemblances to both the orange and grapefruit, particularly to the latter.  The name represents a combination of Chi(na), the local term used for the sweet orange, and (to)ronja, the Spanish word for grapefruit.

According to Moscoso (1958), from whom the characterization above is adapted, this fruit first came to his attention in 1956 as a wild seedling tree in the mountainous Angeles and Caguanas rural section of Utuado municipality.  Subsequently, however, other seedling trees were found in isolated areas of the coffee zone.  The parentage of Chironja is unknown, but it is thought to be a natural orangelo of local origin.  The fruit has attracted interest and limited quantities are available in the principal local market." 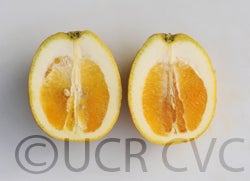 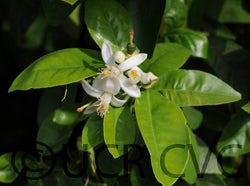 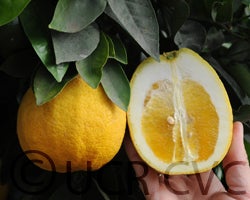 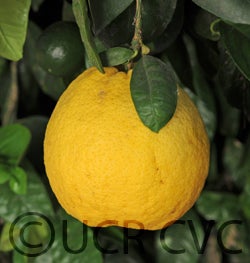