Season of ripeness (as a culinary fruit) at Riverside

Season of harvest for Jewish ritual use

Late July to the Sukkot holiday (September or October)

Etrog trees are small and shrubby with an open growth habit. The new growth and flowers are flushed with purple and the trees are sensitive to frost. The leaves are oblong but slightly pointed and somewhat rumpled with serrate margins. The fruit of the CVC accession looks somewhat like an oblong lemon, but with a shape that approximates the flame of a candle. The mature fruit is considerably larger than a lemon. The rind is yellow, glossy, thick and bumpy. It is very fragrant, with a distinctive aroma of violets derived from beta-ionone. The fruits hold well on the tree, especially in coastal districts. Seeds are numerous. The pulp is pale yellow and acidic, but not very juicy. Some varieties of etrog retain a persistent style (called “pittam” in Hebrew), but the CVC accession typically does not.

Etrogs primarily are grown for Jewish ritual use in the Sukkot harvest festival, held in September or October. Jews believe that this is “the fruit of a goodly tree” mentioned in Leviticus 23:40: “And you shall take of yourselves on the first day the fruit of a goodly tree, a palm branch, the myrtle branch, and the willow of the brook; and you shall rejoice before the Lord your God seven days.” Trees for this purpose must not be grafted on rootstock like most other citrus; instead, they must be grown on their own roots, from seeds or cuttings; these must be from trees descended from stock known or believed to have never been grafted. The beauty of the fruit is important to observant Jews, and unblemished, shapely fruits – always a small minority of the crop – can sell for $100 or more.

Blemished specimens, and fruits from grafted trees, are sometimes sold for culinary use. The rind is used to make preserves, and as a flavoring ingredient for savory dishes, desserts and alcoholic beverages.

Although standard authorities (Hodgson, 1967; Saunt, 2000) treat Etrog as one cultivar, it is clear that this name may refer to a dozen or more distinct cultivars or genotypes. Indeed, the word “etrog” has several meanings, of varying degrees of specificity:

1) On the most general level, in Hebrew and Yiddish “etrog” simply means “citron,” including all members of the species Citrus medica; thus, an Israeli might call a Buddha’s Hand or Fingered citron a “Fingered etrog,” although it is unsuited for Jewish ritual use for the Sukkot harvest festival.

2) The primary and most common meaning, however, includes the cultivars or types of citron that are considered suitable for Jewish ritual use, for reasons both of tradition and morphology (shape, size, thickness of albedo, etc.). It was with such a meaning in mind that the Chazon Ish (1878-1953), a revered ultra-Orthodox rabbi, remarked of a particular tree whose purity and authenticity he endorsed, “That is an etrog.” However, Jewish sects and individuals differ in the characteristics and varieties they require or prefer; so it seems reasonable to define “etrog” in this sense as including all those genotypes that some group of observant Jews considers suitable for ritual use. Etrog cultivars include Diamante (Yanaver), which is acid and seedy, grown in Calabria; Assads, which is acidless and often seedless, grown in Morocco; Israeli selections such as Braverman, Halperin and Lefkovich, and Kibilevitch, which are acid and seedy; and Yemen (Temoni), which has seeds but no juicy flesh, and originated in Yemen. These cultivars are very likely all pure citrons (Nicolosi, 2005), but do not comprise a monophyletic family group: the etrog group, as a taxon, is either paraphyletic, meaning that it does not contain all the descendants of its most recent common ancestor, or possibly polyphyletic, if the trait that its members have in common – suitability for Jewish ritual use – was selected separately from different branches of the phylogenetic tree of C. medica.

3) To the extent that scientific writers and germplasm collections have attached the name “Etrog” to particular genotypes, without knowing or being more precise about the variety, it could be argued that these genotypes are, as a practical matter, named “Etrog.” For the reasons adduced above, however, such inexact nomenclature is misleading.

“Etrog” is the most common romanization of the original Hebrew letters, and accords with the pronunciation of Sephardic Jews, of Middle Eastern, North African and Spanish origin; “esrog” follows the usage of Ashkenazi Jews, of Central and Northern European ancestry. Alternative spellings include “ethrog,” “athrog,” etc. All these variations have no taxonomic significance, just as a “lychee” is the same as a “litchi.”

It is not certain which particular variety of etrog is at the Citrus Variety Collection at Riverside. Experts who have examined specimens and photos of the fruit suggest that it might be the Ordang variety. There is another, similar accession (CRC 3526 / PI 539425) named Etrog in the CVC at the UC South Coast Research and Extension Center in Irvine.

Budwood of this accession is available through the Citrus Clonal Protection Program. Some nurseries sell etrog trees, and a few specialty growers sell the fruit. However, strictly observant Jews consider the fruits borne on trees derived from CCPP budwood as unsuitable for ritual use, since the trees and their parents are grafted. Even a tree grown from seed or cuttings falls under this prohibition, if any of its ancestors were grafted.

Several commercial farmers have tried to raise etrogs for Jewish ritual use in California. Since perfect fruits can fetch high prices, such a venture may seem tempting, but most attempts have failed. Success in growing etrogs for Jewish use would require:

1) A virtually frost-free location, since citrons are very cold-sensitive.

2) For propagation, seeds or cuttings derived from a strain certified as pure by a rabbinical authority.

3) Adherence to applicable Jewish and civil laws, under continuing supervision by a rabbi.

4) Large investments of time and labor to perform the horticultural practices necessary to produce salable fruit. This includes careful protection of the fruit against blemishes caused by wind, sunburn, thorns, and insects.

5) A relationship with a reliable wholesale buyer.

The variety called Etrog at the CVC (CRC 3891) is not ideal for commercial production for culinary use, because the yield is lower than that of varieties such as Diamante and Corsican, which are grown for that purpose in Europe.

EMN, 12/1988: Fruit harvested at Lindcove examined. Except that there are very few persistent styles, this matches the Citrus Industry description of Ethrog very well.

Description by Water T. Swingle and Phillip C. Reese in “The Botany of Citrus and Its Wild Relatives,” in The Citrus Industry, Volume 1, Chapter 3, p. 372

Distribution.—Western Asia and Mediterranean countries; known only in cultivation.

The “Etrog” of the Jews, used in the Feast of Tabernacles, is not mentioned in the Bible. It probably did not reach Palestine until after the time of Alexander the Great and was not used by the Jews in fulfilling the prescriptions as given in Leviticus 23:40. Immanuel Löw (1924, p 286) stated that its use had been recorded from the time of Alexander Jannaeus (104-78 B.C.).

On the basic of the detailed prescriptions governing the character of the “Etrog” suitable for use in the Feast of Tabernacles, it is highly probable that the present-day Etrog is a survival of an ancient form of the citron, perhaps much like the original form of the species from which the ordinary citron has been developed by selection.

Under the name of Etrog and its synonyms, at least two introductions from Palestine have been received in the United States which correspond with the above general characterization, although there are minor differences. They are evidently selections made for ritual purposes, though, as previously mentioned, any citron fruit that meets the specified requirements is acceptable. In neither has the per cent of persistent styles been above average.

Jericho Ethrog is said to be currently the most widely planted citron in Israel and is characterized by relatively small fruit size, oval shape, and deeply corrugated rind surface. It is reported to be of local origin and to reproduce true to type from seed even though monoembryonic, in which respect it is similar to several of the United States introductions.

From the materials available in California, there appears to be little justification for Swingle's classification of this fruit as the botanical variety ethrog (see chap. 3, p. 372).

Margolin, Hadar. 2003. The lulav and esrog: the laws of the four species. Menorah Publications, Brooklyn.

Ramón-Laca, Luis. 2003. The introduction of cultivated citrus to Europe via Northern Africa and the Iberian peninsula. Economic Botany 57(4):502–514.

Tolkowsky, Samuel. 1938. Hesperides: a history of the culture and use of citrus fruits. John Bale, Sons and Curnow, London. 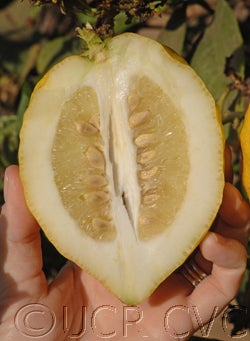 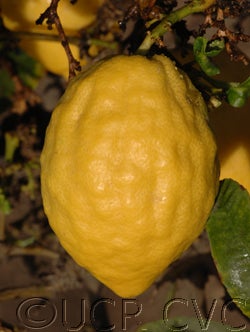 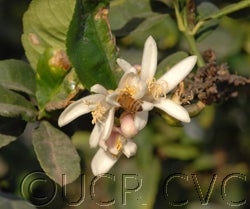