Reported to be a limb sport of Marsh discovered in Corona, Ca.

7/1987, EMN: At Lindcove it has been virtually identical to Redblush.

3/18/1988, EMN: Flesh seems a little darker pink than Redblush this season; which is why it was named and promoted, right? I always thought the darker pink attributed to Shambar was nothing more than a hope-ticle illusion; but maybe it is true.

"Shambar is a seedless, pink-fleshed fruit that resembles Redblush (Ruby) and has been reported to mature slightly earlier than Marsh or Redblush and to exhibit somewhat better color and flavor than the latter.

It was discovered by Alec Barnes in 1936 as a limb sport of Marsh in an orchard of the Chace Brothers (later American Fruit Growers Company) at Corona, California.  It was first described by A. D. Shamel of the U.S. Department of Agriculture.  Shambar was introduced commercially in 1945, but has been little propagated." 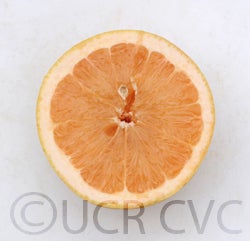 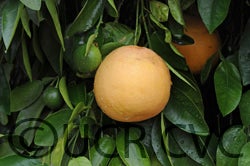