Ruby blood orange was introduced from an unknown Mediterranean country to Florida about 1880 and brought to California soon after.

OJB: The development of blood coloration in Ruby is variable and for this reason, it has not become a popular variety. In California's coastal region, it never develops red pigmentation. Ruby is at its best in hot interior districts, however under these conditions the pigmentation is still variable. Ruby has since been used as a parent variety in the development of new varieties of citrus and it has been found that although Ruby itself is poorly colored, its progeny tends to be very highly colored.

The Ruby variety was introduced from the Mediterranean (country unknown) to Florida about 1880 and brought to California not long thereafter.  From its appearance and behavior, it may prove to be an old Italian variety.  In both Florida and California, Ruby is highly uncertain and variable with respect to development of blood coloration.  For this reason, it has not become popular and remains merely a novelty.  In California's coastal region, it never develops red pigmentation.  Ruby is at its best, with marked variability, however, in hot interior districts.  In such districts, the quality is excellent and part of the crop colors beautifully.

Several unnamed clones or selections are known to exist which differ in blood coloration development and other minor respects." 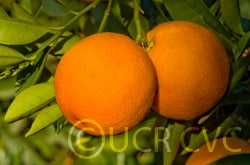 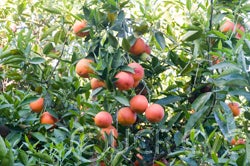