Reinking pummelo was reported to be a hybrid of Kao Phuang pummelo and Shamouti sweet orange made in 1948.

OJB: The tree grows well to a large size with big leaves and drooping branches. The fruit is large and pear-shaped with a slightly flattened bottom and has a slightly pebbled, thick, yellow rind.  The flesh is light yellow, ricey in texture but juicy.  The flavor is good, but the fruits are seedy.  Reinking fruits mature early and holds fairly well on the tree. ‘Reinking’ is phenotypically a pummelo with little or no suggestion of sweet orange in its background, and subsequent examination of the Reinking variety by USDA personnel have cast doubt upon its parentage. As Martin and Cooper wrote in 1977, it is now believed that the Reinking selection “is not a pummelo-orange hybrid and is probably the result of contamination by pummelo pollen of some unknown origin, even though the cross was protected by bagging.”  DNA-level research conducted at the University of California, Riverside and USDA by Barkley et al in 2002-03 confirms earlier suspicions that Reinking is pure pummelo in its parentage. 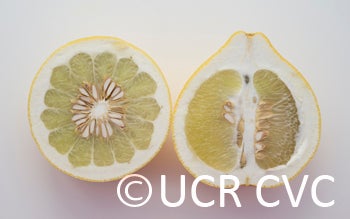