Two seedlings obtained from Bruce Bartholomew, Curator, in 1/1978. Seeds collected by Bartholomew on the west side of Hunchback mountain in the New Territories of Hong Kong at an elevation of 580m in 11/75. seedlings labelled BB 394. *Trees in lathhouse B may be this accession &/or CRC 3789. This accession and CRC 3789 are NOT the same. See note dated 1/18/89 on CRC 3789 accession card.

Hongkong kumquat, Fortunella hindsii, is the smallest-fruited of the kumquats with round fruits that rarely exceed one-half inch in diameter.  The tree is very small and very spiny and the leaves are small and narrow.  The fruits are red-orange at maturity and hold on the tree well.  The rind is thin, and there are several large seeds in each fruit; thus, the fruit is virtually inedible.  Hongkong kumquat is grown primarily as a novelty.  The common (wild) form of the species is naturally tetraploid.  A cultivated diploid form, usually designated Golden Bean kumquat, has slightly larger fruits, larger, more slender leaves, and shorter spines.

1/18/1989: CRC 3789 & 3790 compared. 3789 tree is much smaller and less vigorous growing. Leaves slightly smaller and tend to drop more readily, making small orange fruits appear more prominent. Fruits about the size of Severinia buxifolia fruits, larger on 3789 than 3790. Non-edible fruit is mostly seeds- 2 or 3 in each.

1/18/1989, EMN: Seeds obtained from Mr William B Chapman, League City, Texas in November 1975. Seeds apparently from a "tree" of Dr JR Brown, Mr Chapman, who sent seeds, has a "tree". Their trees apparently obtained from Hans Peterson's Nursery (Houston?). Mr. Chapman states that Peterson's was propagating hindsii from seed and thinks that Peterson got seed from a wholesale seed supply. 10 seedlings retained all look alike. Mature fruit by November 1977. Fruit characteristics appear to agree with Swingle's description of F. hindsii var Chintou, aka Golden Bean kumquat. Chromosome number of all seedling definitely 2N = 18. F hindsii is compared with F hindsii var Chintou in The Citrus Industry, Vol I, pp 333-335. CRC 3789 and 3790 compared. 3789 tree is much smaller and less vigorous growing. Leaves slightly smaller and tend to drop more readily, making small orange fruits appear more prominent. Fruits about the size of Severinia buxifolia fruits, larger on 3789 than 3790. Non-edible fruit is mostly seeds - 2 or 3 in each.

12/21/2010, RRK: There are currently two accessions of F hindsii maintained at Riverside, PI 539723 and PI 539724. PI 539723 has traditionally been stated to be 2N and associated with the 'Golden bean' kumquat, whereas PI 539724 has been stated to be 4N and associated with the 'Hong Kong wild' kumquat. The two genotypes are compared in Swingle (1943), pp 349-353, and its revision as Swingle and Reece (1967), pp 333-335. Although Swingle (1943) has more information on these genotypes than does Swingle and Reece (1967), the later is more easily accessible (including an online version) and has most of the pertinent information. See also the information in Hodgson (1967), pp 582-583. It does appear that the received wisdom regarding the ploidy levels is probably incorrect. A letter from the late Prof RK Soost to the donor of PI 539723, Mr William Chapman, dated 07/12/1977 states "I finally have definitive chromosome counts on the F hindsi seedlings...from seed you supplied in 1975...confirming the somatic (diploid) count of 2n = 18. A separate letter from Prof Soost to the donor of PI 539724, Dr Bruce Bartholomew, states: "At long last we got some definitive chromosome counts on the Fortunella hindsii seedlings that I obtained from you in January 1978...The chromosome number of both seedlings is clearly 2n=18." Thus, it appears that both F hindsii accessions are diploid (although this should be confirmed again after over 30 years). In this case, apparently both PI 539723 and PI 539724 would correspond to Swingle's F hindsii var Chintou. In contrast to Swingle's statements in the above sources, Prof Soost states in the letter to Mr Chapman: "I suspect that the basic chromosome number...is 2n = 18, just like all other citrus and related genera...[t]he tetraploid would be the derived type...a tetraploid was either collected by chance of the tetraploid may be established as a cultivar in China. It's hard to believe that the tetraploid would be growing as a wild plant (as described by Swingle), in preference to the diploid."

"This is the Mame or Hime kinkan of Japan.  According to Swingle, this species grows wild in Hongkong and in the Chekiang and Kwangtung provinces of China.  The most distinctive features include the small size and spiny nature of the plant and the very small, brilliantly colored, subglobose, virtually inedible fruits that contain three or four segments and relatively large, plump seeds.  Since the pollen-mother cells contain double the normal number of chromosomes, Swingle considers it to have originated as an autotetraploid.

The Hong Kong kumquat is apparently of ancient origin, for it is rather widely distributed in the wild and is undoubtedly the chin chu (golden bean) or shan chin kan (mountain golden mandarin) described by Han Yen-chih in 1178 A.D. and referred to by an earlier writer whom he quotes.

In modern times, however, the name golden bean kumquat has been restricted to a cultivated diploid form, the chin tou of China or Kinzu kinkan of Japan, which Swingle considers to have originated from the wild species.  According to Swingle, it differs from the parent species principally in having larger, thinner, and narrower leaves, shorter and more slender spines, and somewhat larger fruits.  The flowers are also smaller.

It may be of interest to note that the fruits of the Hongkong kumquat appear to be the smallest of the true citrus fruits.

While the Chinese are said to prize these fruits and to preserve them for use as a spicy flavoring, elsewhere they are merely novelty ornamentals, grown primarily as potted plants. " 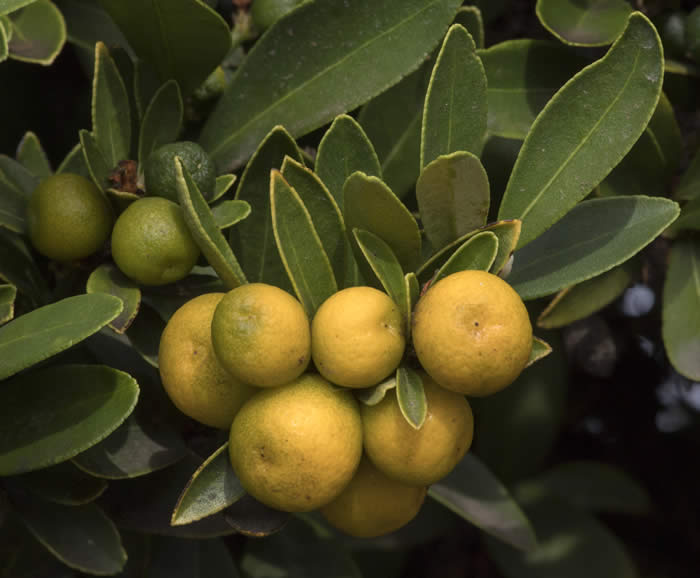 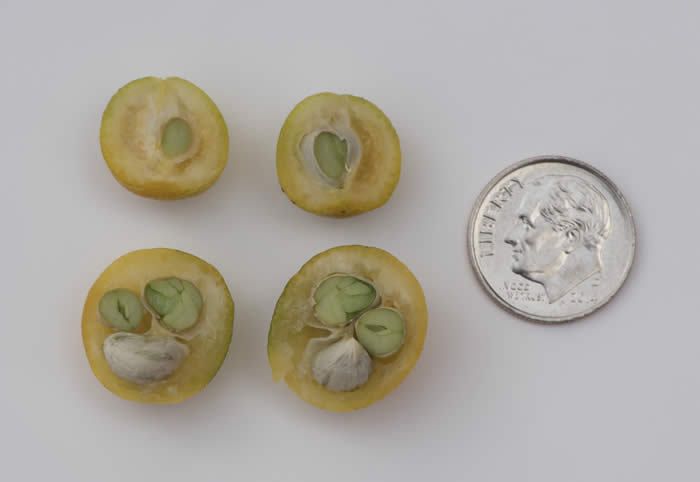 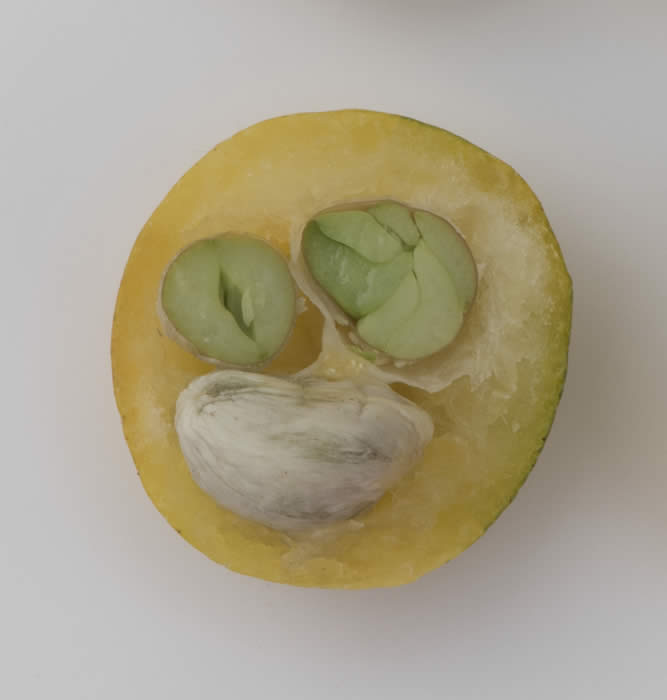