Received as seed from unknown source, possibly in 1969.

Has not been observed

Too tender for the field, this accession is kept in the greenhouse only.

Open flowers of this species were not seen by Ridley.   As Swingle reported in the original description of Merrillia, petals from flowers of a tree in the Singapore Botanic Gardens grown from seed from Patani Province, in extreme southern Thailand, were "35-40 X 5-10 mm, bluntly pointed at the apex and narrowed gradually to the base."   A small tree grown in the citrus greenhouse at Washington, from seeds of this tree in the Singapore Botanic Gardens, bore flowers that were even larger, having petals 4.5-5.5 cm long and 8-11 mm wide.   The flowers were pendent and never opened fully, having the imbricate petals curving outward at the tips and making a trumpet-shaped flower, greenish-white on the outside and white within.   No other species of the orange sub-family has flowers of this type.   Swingle directed attention (1918, p. 339, pl. 5) to the curious pair of nearly opposite, small, broad, and often suborbicular leaflets which are borne very near the base of the rachis, much nearer than in any other pinnate-leaved species in the orange subfamily.

This remarkable species, called ketenggah in the Malay Peninsula, resembles Murraya paniculata in its general habit of growth and in its leaves, and even in the texture and color of its wood.   These two species are sometimes confused by the natives under the name kemuning, which properly applies to Murraya paniculata.   The flowers of Merrillia are entirely different, and its fruits are still more unlike those of Murraya, so it stands out taxonomically as a strikingly different plant obviously belonging to a distinct genus.

This tree well deserves to be grown in greenhouses or out of doors in warm subtropical climates as an ornamental.   When a small tree, 3 to 3.5 m high, it flowers abundantly at frequent intervals, almost all the year round.   Its curious, pendent, trumpet-shaped flowers, although not conspicuously colored, are attractive because they are produced in such abundance and are pleasantly fragrant.

In his notes following the original description of Murraya caloxylon Ridley stated that it "is famous in the Malay Peninsula for its beautiful wood," which "is of a bright yellow color ornamented with dark brown streaks and stains, fairly hard in texture and taking a good polish."   It is said to be highly prized by the Malayans for making walking sticks, kris handles, and other small objects.   A British official made beautiful furniture, boxes, etc., out of the wood.   Foxworthy (1927, p. 170) considered it a slow-growing species and thought that it would require about thirty years to reach commercial size.   It is so rare in the wild state that any considerable supply of wood would have to come from cultivated plants.

This species, or one very closely related to it, has been found in northeastern Sumatra directly across the Malacca Strait from its habitat in the Malay Peninsula.   Mr. B. A. Krukoff, in November-December, 1932, collected good fruiting material of this tree "in primary forests on ‘red’ soil" at Hoeta Padang, near Asahan, northeastern Sumatra (Krukoff, No. 4319, in Herb. Arnold Arbor.).   Krukoff noted on the label "tree 110 ft. [33.6 m] high," i.e., nearly twice the height yet reported for M. caloxylon growing in the Malay Peninsula!   An earlier collection made at the same place in December, 1930, by Krukoff was from a small tree only 15 cm in diameter.   Mr. C. G. G. J. van Steenis collected in 1932 a leafy branch of Merrillia at 120 m altitude on Mount Maligas, Simeloengoen, eastern Sumatra (van Steenis, No. b.b. 20415, in Herb. Arnold Arbor.).   No other tree in the orange subfamily has been found to attain the height reported by Krukoff.   If such giant trees produce wood as beautiful as the smaller form growing in the Malay Peninsula, it would be worth while to test them under cultivation." 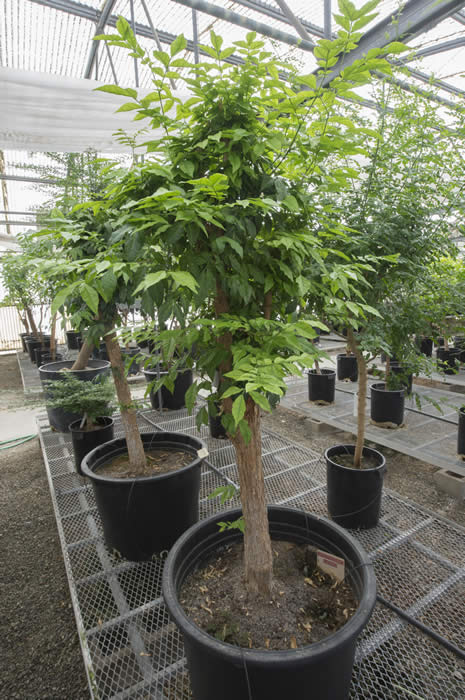