Received as budwood from Import from Sicily, via Glen Dale and CCPP, 1977.

1987, EMN: Import received into CCPP from Glen Dale in 1960; was STG to remove exocortis & concave gum. Original import had exocortis which was removed by shoot tip grafting during processing as VI 360. Clementine Monreal has been much seedier than ordinary Clementine at Lindcove.

"At least two clones of Clementine are known to exist in North Africa—the common ordinary and the Montreal.  While the two are indistinguishable with respect to the tree, and virtually so for the fruit, the former exhibits self-incompatibility, and hence the fruit is seedless or nearly so in the absence of cross-pollination.  Evidently associated therewith is less regularity and certainty of production under unfavorable conditions of climate or orchard management.  The Monreal clone, which was found in 1940 in the orchard of Vincent Monreal at Perregaux, Oran, is self-compatible and without cross-pollination the fruit is regularly seedy.  The bloom is much less abundant and the seeds slightly smaller.  In this connection, it should be mentioned that seedy fruits average somewhat larger than seedless fruits and are also slightly sweeter.  In Morocco, selections from mother trees of outstanding bearing behavior and low seed content have not shown significant differences.  In both Morocco and Spain, seedless Monreal clones have been reported, but thus far they have not demonstrated superiority over the ordinary clone.  The Spanish clone, Clementino de Nules, is said to have originated as a budsport in Nules, Castellón Province.

Chapot (1963b) has recently described a small-fruited mandarin which Trabut (1926, p. 4) either found or introduced and called the mandarinette.  It exhibits so many resemblances to Clementine, including seed monoembryony and early maturity, as to suggest very close relationship.  The principal differences reported relate to the odor of the leaf oil, the form of the seeds, and the color of the chalazal spot.

Climatically, the distinctive features of the Clementine variety are its low total heat requirement for fruit maturity and the sensitivity of the seedless fruit to unfavorable conditions during the flowering and fruit-setting period.  In regions of high total beat, the Clementine matures very early—only slightly later than the satsuma mandarins.  Such regions also favor production of fruit of maximum size and best eating quality.  As a consequence, Clementine is without doubt the best early variety in the Mediterranean basin, particularly in North Africa, and is highly promising in other regions of similar climate.

With reference to sensitivity of seedless fruits, however, the almost universal experience has been one of uncertain and irregular bearing behavior because of excessive shedding of young fruits during the fruit-setting period and a few weeks thereafter.  Moreover, it has been noted that shedding is inversely correlated with the seed content of the fruit.  Thus, it is well established that under conditions where the ordinary Clementine is notably capricious in bearing behavior the seedy Monreal is regularly productive.  Recently, it has been shown that the bearing behavior of the ordinary clone can be regularized by cross-pollination.  In descending order of effectiveness as pollinators in Morocco, Chapot (1963a, p. 14) lists sour or bitter orange, the Mediterranean, Dancy, and Wilking mandarins, the lemon, and the sweet oranges, including Valencia.  Soost (1963) recommends the use of Dancy and Wilking in the Coachella Valley of California.  There can scarcely be doubt, therefore, that the safest procedure is to provide suitable cross-pollinators or grow the Monreal clone, the fruits of which are commonly excessively seedy and hence less marketable.

It should be pointed out, however, that the warm, equable, coastal regions of western Morocco enjoy climatic conditions that are normally favorable for fruit setting and permit the production of good crops of virtually seedless fruit.  Because of the high total heat, the fruit is exceptionally early in maturity and commands a premium in the export markets.  Moreover, even under conditions less favorable for fruit setting, it has been shown that regularity of bearing and increased production result from adequate nitrogenous fertilization and efficiency in irrigation.  Finally, it has been demonstrated that bearing can often be regularized and increased by means of a combination of girdling or ringing and light pruning—a tree management practice distinctive to the culture of this mandarin.  The procedure recommended consists of biennual double-girdling—at full bloom and the end of bloom, respectively—alternated with a light pruning to stimulate the development of new shoot growth.

Application of these cultural practices has made it practicable for Moroccan growers to establish three export categories for this variety—seedless Clementines, Clementines (maximum of 10 seeds), and Monreal (more than 10 seeds)." 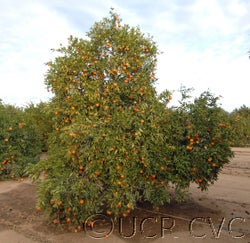 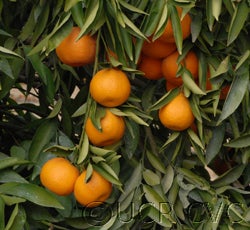 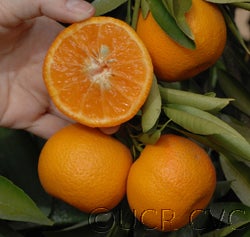