Received as budwood from the University of California, Riverside, 1975.

Melogold is a triploid hybrid of Acidless pummelo and a 4N seedy Marsh grapefruit.  It was developed at the University of California, Riverside by Drs. Cameron and Soost.  It is a sibling of Oroblanco grapefruit hybrid and was released in 1986.  Mellow flavor (low acid) = Melo, gold for the deeper color of the rind than Oroblanco, hence Melogold. Patent on this cultivar is held by the University of California.

Season of ripeness at Lindcove

12/21/1984, RKS: "In 1958, an essentially acidless pummelo, CRC 2240, which had been shown to impart low acidity to its progenies, was crossed as seed parent with a seedy, white, tetraploid grapefruit. The small population from this cross consisted of 1 tetraploid and 6 triploids, which were field planted in 1962. Two of the triploids had particularly favorable characteristics and were propagated for further testing. One of these was released in 1980 as 'Oroblanco'. The second is was released as Melogold. The general characteristics of the fruit resemble those of white-fleshed grapefruit cultivars, but are more pummelo-like than 'Oroblanco'. Fruit size is much larger than 'Marsh' grapefruit and 'Oroblanco' at all test locations. Weight at Riverside from 1967 through 1975, averaged 470 grams for 'Melogold', 360 grams for 'Oroblanco', and 280 grams for 'Marsh'. Shape is comparable to 'Marsh' and 'Oroblanco' with a slight tendency to obconate fruit. Exterior peel color is slower to develop than in 'Marsh' grapefruit, but late in the season is comparable. Exterior peel texture is smooth to slightly pebbled. Average peel thickness is slightly greater than 'Marsh', but as a percentage of fruit diameter is equal to 'Marsh' and thinner than 'Oroblanco'; interior color and texture are the same as 'Oroblanco'. As with 'Oroblanco' the central core hollow is greater than 'Marsh' at maturity. The flesh is tender and juicy, separating well from the segment membranes. Percent juice has been equal to 'Marsh' and slightly higher than 'Oroblanco'. 'Melogold' may have a slight bitterness, particularly early and late in the harvest season. In taste tests, 'Melogold' has always been preferred by a wide margin over 'Marsh', but usually was a very close second to 'Oroblanco'. At Riverside, solids have consistently been slightly lower than 'Oroblanco', but at Lindcove they have sometimes been slightly higher. Acidity at Riverside has also been consistantly slightly lower than 'Oroblano', but has fluctuated at Lindcove. As with 'Oroblanco', acidity is much lower than 'Marsh' at all sampling dates through the season at all test locations. The low acidity with moderate solids produces a ratio that is much higher than 'Marsh' at all sampling dates. Fruit from Coachella Valley and South Coast Field Station also have acidity and moderate solids even early in the season. However, fruit from Coachella Valley have been rather insipid, and fruit from South Coast Field Station generally have been slightly bitter and lacking in flavor. As with 'Oroblanco', 'Melogold' appears to be best adapted to the inland citrus areas of California. At Lindcove, the season of use is from early November to February, just slightly earlier than 'Oroblanco'. At Riverside, maturity is from early December into March. As with grapefruit, 'Melogold' can be utilized as a breakfast or salad fruit, but the flavor will be unique.

10/1988, EMN: My opinion, for what it might be worth, regarding Oroblanco vs Melogold, is this: For maximum returns as a cash crop, plant your acreage to Melogold; but save one space near your back door for a tree of Oroblanco for your own use.

OJB: Melogold trees grow vigorously to a large size with a somewhat spreading form.  Melogold fruits are oblate in form with a slightly flattened base.  The rind is smooth and medium to dark yellow at maturity and thinner than Oroblanco for a similarly-sized fruit.  The large fruits typically average one pound in weight.  The flesh is pale yellow in color, seedless, tender, and juicy.  The flavor is mild, sweet and reminiscent more of pummelo than of grapefruit.  Melogold is early in its maturity and holds well on the tree. 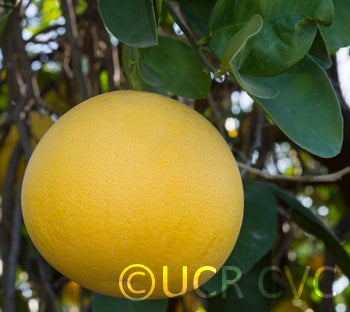 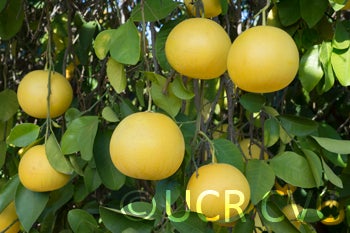