Received as budwood from Israel via Glen Dale & CCPP, .

Shamouti originated some time prior to 1844 in an orchard near Jaffa, Palestine (now Isreal), as a limb sport. Within a few decades, it became the leading variety.

EMN, 2/8/1988: This appears to be typical Shamouti in both foliage & fruit characteristics.

OJB: Shamouti is a medium to large, oval-shaped sweet orange.  It is nearly seedless, and has a thick, leathery rind.  Shamouti peels well, and ships and stores well. It is a midseason fruit.  Although Shamouti is the preferred name of the fruit, it has also been called Jaffa in Europe.  The tree is sensitive to heat and aridity, and so it is not adapted to hot desert or semitropical climates.

Description from The Citrus Industry, Volume 1 (1967)

Tree moderately vigorous, distinctive in appearance, upright in growth habit, with thick, thornless branchlets; leaves large and broad, with petioles which are small and narrowly winged. On Palestine sweet lime rootstock, tree is somewhat dwarfed, probably because of xyloporosis infection, but is regular and highly productive, whereas tree is larger on sour orange but less productive because of pronounced alternation.

While Shamouti, of which there are various other spellings, is the preferred name for this distinctive and highly important variety, it is so well and favorably known in Europe under the name Jaffa that it is now impracticable, as well as undesirable, to undertake to change this usage. There is another, quite different variety of the same name and parentage, however, frequently called Florida Jaffa to distinguish between them.

Like the navel oranges in general, the Shamouti tree is sensitive to heat and aridity during the bloom and hence restricted in range of climatic adaptation. Thus, in very hot, arid regions production is low and the fruits are undesirably large and coarse. Shamouti is clearly not adapted to hot desert or semitropical climates. For reasons that are not clear, probably relating to both climate and rootstock, the commercial culture of this variety is restricted to climatically favored portions of the eastern end of the Mediterranean basin.

According to Oppenheim (1927, 1929), Shamouti originated some time prior to 1844 in an orchard near Jaffa, Palestine (now Israel), presumably as a limb sport in a tree of the local or beledi variety (see also under Jaffa). Its qualities were so outstanding that within a few decades it became the leading variety in Palestine and has maintained this position ever since. It spread to nearby countries and attained importance, notably in Lebanon, Turkey, and Cyprus. It was early exported to Europe, principally England, where it soon established a reputation for its size, quality, and seedlessness. Its distinctive shape provided a natural trademark. Currently, Shamouti is by far the principal variety of the Near East and one of the major varieties of the world. In addition to the countries already mentioned, it is the leading variety in Syria and is grown to some extent in Greece and Egypt. The 1965 production of this variety was estimated at not less than 20 million boxes.

Although efforts were made early to establish this highly reputed variety in both California and Florida, the seed introduced apparently came from fruits of the seedy parent variety rather than the almost seedless Shamouti and gave rise to the Florida Jaffa and Joppa varieties (see Jaffa and Joppa). This fact was not realized for many years, and it was not until about 1920 that the true Palestine Jaffa (Shamouti) was introduced. Thus far, it has not compared favorably in quality and productivity with other varieties.

The evidence indicates that the Shamouti clone is highly unstable and prone to the occurrence of limb sports. Thus, Oppenheim (1927, 1929) and Chapot (1964c) report numerous instances of Shamouti trees containing branches that produce round, seedy fruits typical of beledi, and a few cases have been reported of beledi trees with Shamouti-like limb sports. Chapot (1954, 1955b) reports the existence of four varieties in Lebanon, the names of which clearly suggest the likelihood of Shamouti origin. They are Shamouti or Iaffaoui Beledi, a seedy Shamouti; Shamouti or Iaffaoui Maouardi, a seedless blood Shamouti; Maouardi Beledi, a seedy, blood Shamouti; and Shamouti or Iaffaoui Moghrabi or Meski, an acidless, seedy Shamouti. Other varieties which markedly resemble Shamouti and are known to have originated from it include Kinariti or Kinnereth (Early Shamouti) and the pink-fleshed Sarah of Israel and Shamouti Masry (Egyptian Shamouti or Khalily White). (See Shamouti Masry, below.) Finally, it should be noted that Maltaise Blonde of North Africa, sometimes called Petite Jaffa, and Barile of Italy closely resemble Shamouti though their fruit is somewhat smaller (see Maltaise Blonde)." 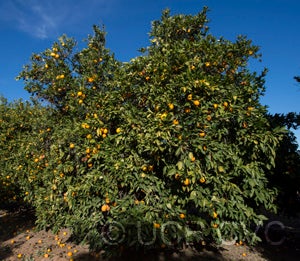 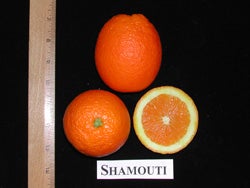