Received at Glen Dale in 1920, from J.C. Leslie, Supt. Govt. gardens. R.S. Woglum, of the Bureau of Entomology, visited India in 1913, and states concerning this orange: The Nagpur orange is a large, loose-jacket orange of the tangerine group.

Tree commonly vigorous and distinctive in appearance because of pronounced upright growth habit.  Productive but with strong alternate-bearing tendency.  Reported to be less cold-resistant than most mandarins.

This is the famous and highly reputed ponkan of South China and Formosa, the Batangas mandarin of the Philippines, and the Nagpur suntara or santra (various other spellings) of India.  Other names that occur in the literature and should best be dropped include Swatow orange andChinese Honey orange.

Tanaka (1927) is of the opinion that this mandarin originated in India and because of its excellence spread widely throughout the Orient at an early date.  This view finds support in the fact that for centuries it has been cultivated in the form of seedling groves in widely separated parts of India—notably in the Coorg district in the south and Assam and neighboring Nepal and Sikkim in the northeastern portion of that country.  As previously noted, there is reason for believing that this fruit reached Europe as early as 1805.  The first known introduction into the United States, however, is referred to 1892 or 1893 when an American medical missionary in China sent fruits to J. C. Barrington of McMeekin, Florida, from which seedlings were grown.  One of these was later identified as Ponkan (Tanaka, 1929a).  Prior to this identification, however, the Wartmann Nursery Company at Ocala had propagated this fruit on a limited scale under the name Warnurco tangerine.  More recent introductions have been made by the U.S. Department of Agriculture.

Because of its highly distinctive characteristics and his conclusion that the Batangas mandarin was the fruit described by Blanco under the species name reticulata, Tanaka (1954) restricted this species to the Ponkan group, a view which in the judgment of the writer has considerable merit, although it has not been generally accepted.  Several forms or clones are recognized of which that characterized above and known in India as Nagpur suntara is clearly superior.  Almost certainly the highly important seedling varieties known variously as Coorg, Assam, Khasi, Butwal, and Sikkim in India are nucellar clonal budlines of the Nagpur suntara.  In this connection, it may be of interest to note that the variety Oneco, which originated in Florida from seed received by P. W. Reasoner in 1888 from northwestern India, has been identified as a form of ponkan (Tanaka, 1929a).  Oneco differs, however, in that the fruit is rougher and seedier, ripens somewhat later, and retains its quality on the tree much better, although the rind puffs rather badly.  Oneco has never achieved commercial importance and is grown primarily as a home and gift-box fruit.  Oneco appears to be the Cravo Tardia of Brazil.

The Nagpur suntara is the citrus fruit of greatest commercial importance in India.  While accurate statistics are not available, it is believed that the total plantings of this variety and its seedling derivatives are in the neighborhood of 100,000 acres.  The modern commercial industry based on the use of budded trees centers in the Nagpur region of central India, where a small but growing processing industry has developed.  Elsewhere this fruit has importance in Ceylon, Indonesia, Malaysia, the Philippines, South China, Taiwan, and the southern part of Kyushu Island, Japan.  It is of limited importance in Brazil and very minor importance in Florida.

Climatically, the ponkan is one of the most tropical mandarins.  Under tropical conditions the fruit attains maximum size and quality and finds little competition from other mandarins.  In the hot arid subtropics, however, it has generally proven disappointing and other varieties are better adapted and more popular.

Much the most unusual and distinctive cultural practice is that followed in central India, where the growers select and accentuate one of the three periods of bloom characteristic of the mandarin tree there to control the time of maturity and increase the resultant crop.  This is accomplished by what is commonly referred to as the "resting treatment" (Gandhi, 1956, pp. 32-35).  In reality, it is a combination of treatments that place the trees under severe moisture stress from which they are released either by irrigation or the advent of the summer monsoon rains.  The practice is similar to that employed by Sicilian lemon growers to accentuate the early fall bloom and increase the summer or verdelli crops.  The differences in the characteristics of the fruit from the spring and fall blooms are remarkable.

Another distinctive practice has already been mentioned, namely, the exclusive use of unbudded seedling trees in the important Coorg and Assam regions.  The resulting orchards are remarkably uniform, and the trees extremely tall and slender." 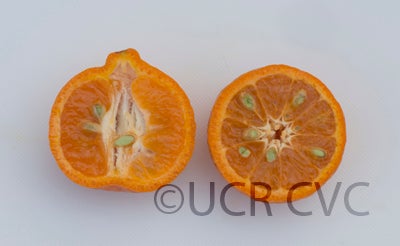 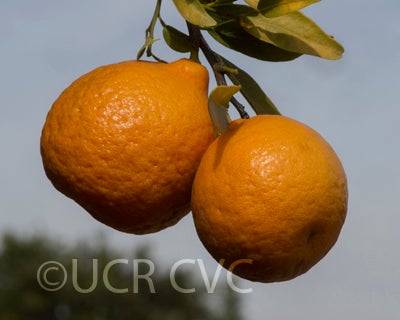 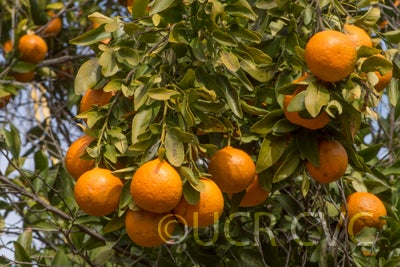