3/1/2010, TJS: The 'Australian finger lime', a citrus relative also known as Microcitrus australasica, is one of six different species of citrus considered to be native to Australia. This VI is one of 8 different accessions of Microcitrus australasica in the Citrus Variety Collection, and was imported from Sydney, Australia, in 1965. Depending on the type of rootstock used (The CVC has used several: Schaub rough lemon, Cleopatra mandarin, C-35 citrange, Carrizo citrange, Calamondin, Citrus macrophylla), the 'Australian finger lime' can be a very small (about 5 feet on Schaub rough lemon) to large-sized tree. The leaves are tiny at approximately one-half inch long and the branches become very dense and spiny with about 1 thorn set in every leaf axil.  New growth is purple in color and the one-quarter inch wide flowers are white and pink during the main flowering season of February to April. The finger limes are about three inches long and roughly the size of an average person’s index finger, but fruit from juvenile trees can be less than one inch long. The skin of the finger lime is usually a greenish black to very dark purple and thin, but durable. Once the fruit is cut open the tiny round juice vesicles will slowly seep out of the fruit without squeezing, and resemble what we like to call “citrus caviar”.  The round vesicles are usually a clear-green, but can be very light pink. The juice is very tart, much like a Mexican lime.  Although the tree produces fruit year round, the main fruiting season in California is November-December when the fruit falls off in your hand. Australian finger lime is reported to fetch approximately 40-50 dollars per pound. The fruits are technically edible, but this is not commonly done. Its most common use is as a garnish or flavor component in culinary creations.

RRK, 12/2006: The source history of this accession is confusing and not well documented. The PI book lists this PI as being received as seeds in 1966. However, both the CRC and USDCS records indicated that the seeds were received directly by Joe Furr in 1965 "from Yuma, Arizona" (according to CRC records) or from "Dept. Agric. Sydney" (according to USDCS records). The origin direct from Australia is consistent between the PI book and the Date Station records. Possibly the CRC records mean that the accession arrived at the CRC from Indio via Yuma. The date received at the CRC is not noted on the CRC card, however there is a planting date of 1971. Other CRC records indicate that it was received in 1968. However, the CRC number is in the middle of other accessions that were received in 1966. It therefore seems most likely that the accession was received at the CRC as small plants from the USDCS approximately one year after receipt at Indio. Although the origin in Australia is not well documented ("Dept of Agriculture, Sydney, Australia") other accessions of M. australasica are documented in CRC records as being collected by W.V. Mungomery [sic], Dept. Ind., Mayborough, N.S.W., Australia...from North Arm, Murwillumbah, N.S.W.". So it is likely that this was also the origin of this accession. Note that this existed for many years at Riverside but was only VI'ed recently due to interest in the use of M. australasica as a garnish by local and other chefs.

RRK, 7/12/2017: This accession of M australasica was received without the varietal epithet sanguinea. Apparently at some point, someone decided the very light pinkish pigmentation merited appending this epithet, and it is included in some (but not all) versions of the archival records.

"This variety differs from the species in that the pulp-vesicles at maturity vary from pink to red in color.

There are similar "pink" or red varieties of oranges (the so-called "blood oranges") and grapefruit, some of which are known to have arisen as budsports.   However, the red-pulped variety of the Australian finger-lime is found growing wild and can be propagated from seed; it seems to have originated without the aid of man." 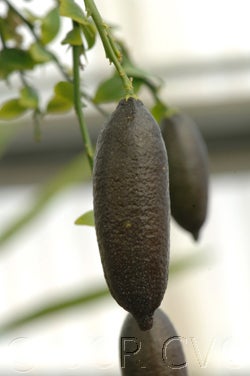 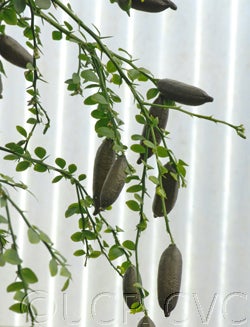 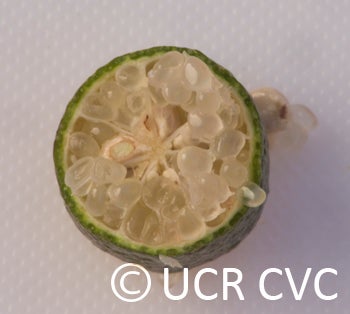 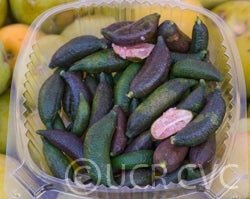 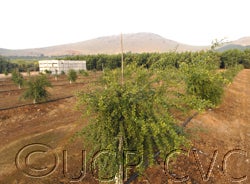 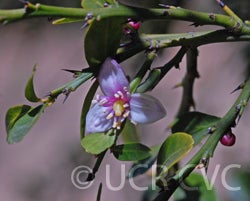 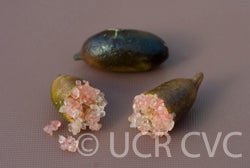 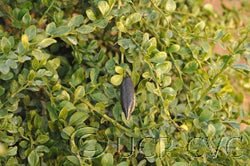 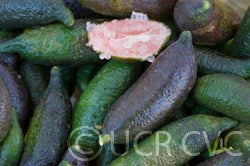 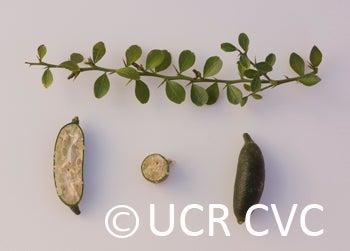 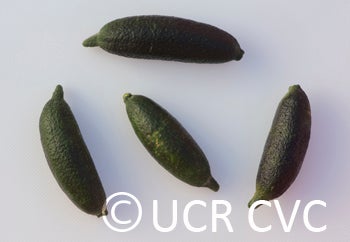 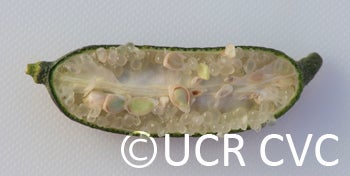