Entrefina is generally considered to be a subvariety or selection of Doblefina.

EMN, 3/23/1987: Very small fruit and only an occasional fruit has blood orange characteristics which are slight rind blush and slight blood color in the flesh mistly next to rind. The accession is very similar to and may be identical with CRC 3152, Doble Fina. It is considered to be a subvariety or selection of Doblefina.

"Fruit small, globose to very slightly oval; seeds very few.  Color similar to Doblefina, but even less certain in development of blood coloration.  Rind surface less smooth than Doblefina, but flesh somewhat juicier and fruit holds better on the tree.  Late midseason in maturity.
Tree said to be more vigorous, larger, and more productive than Doblefina and less subject to dropping of the fruit.
Entrefina is generally considered to be a subvariety or selection of Doblefina, with which it is often confused.  Because of its smaller size and less attractive appearance, this variety commands lower prices than Doblefina and has lost materially in importance." 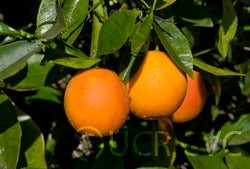