Received as budwood from the UCR breeding program, 1966.

Encore is a late-ripening variety originating from a cross between King tangor and Willowleaf mandarin made by H.B. Frost and was introduced in 1965.

Commerically available beginning in mid-March, but flavor is best from May to July.

The fruit is medium in size with a thin, yellow-orange rind. Encore fruits hold well on the tree without much puffing of the rind. Encore tend to be alternate bearing.  Monoembryonic; excellent flavor;desirable as home garden variety but non-commercial due to rind spots. Can be held on tree as late as September. Alternate bearing.

This promising, late-ripening variety originated from a cross of King and Willowleaf (Mediterranean) made by H. B. Frost at the University of California Citrus Research Center, Riverside.  Encore was selected and introduced in 1965 by Frost's colleagues, J. W. Cameron and R. K. Soost (Cameron, Soost, and Frost, 1965)." 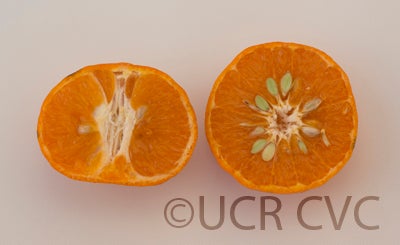 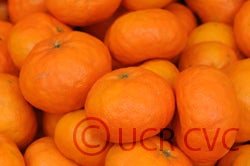