Thought to be a hybrid between Citrus aurantium and Citrus paradisi.

2/22/1988, EMN: Selected budwood from seedling at SCFS nursery, no record regarding single or multiple. The Kikudaidai was known in Japan as early as 1864 and is still grown in gardens as a curiosity. Its flower forms a very short inflorescence and leaves are rather broad with large petiole wings. This accession was heat treated about 1975 for moving out of quarantine to Lindcove.

3/3/2008, DK & TS:  The tree on Carrizo is much larger than the one on C-35, though they're the same age. The tree on C-35 is rather dwarfed, sickly and chlorotic, and the fruits are smaller. The fruits are flattened on the bottom, grapefruit shaped, with a rough, lumpy yellow rind, much sunburned. Some have prominent necks; spongy white albedo; seedy; light yellow flesh, very juicy, sour, nasty aftertaste.

"The Kikudaidai variety is an attractive, somewhat dwarfed ornamental with fruits that have a solid core and are medium-small, subglobose to oblate, yellowish-orange, and characteristically deeply, longitudinally grooved.  The origin of this ornamental is unknown." 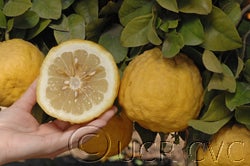 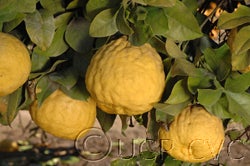