12/5/2006, DK & TS: Medium pebbly rind. Elongate, pointed at apex. Thick, sweet rind; flesh tart, fairly juicy for a citron. Citron of Commerce is supposed to resemble Corsican, but the CVC specimen does not, since it is tart.

4/2022, "Unraveling the mystery of the Citron of Commerce” © David Karp: In the second half of the nineteenth century the type of citron most in demand in the United States, for planting trees or imported peel, was the so-called citron of commerce. Originally “citron of commerce” was a generic term for culinary citron, including any cultivars grown for brining and candying in the Mediterranean area. Only much later, in the second edition of The Citrus Industry (R. Hodgson, University of California Press, 1967), did the phrase become firmly linked with a specific cultivar, ‘Corsican.’

There is no name in Corsica or France (such as “cédrat de commerce”) that is equivalent to “Citron of Commerce”. Originally and primarily it was a descriptive or group name, like “juice orange”; it served like “etrog,” which can apply to multiple citron cultivars used for Jewish ritual. Most writers in the late nineteenth and early twentieth centuries classified as “citron of commerce” several citron cultivars used for brining and candying in the Mediterranean area. Several considered ‘Citron of Commerce’ to be a synonym for ‘Lemon’, also called ‘Sorrento’, a synonym for ‘Diamante’, the most prevalent citron cultivar in Italy.

By the first decade of the twentieth century, because Corsica was the best-known producer of culinary citron at the time, and ‘Corsican’ was its main variety, ‘citron of commerce’ sometimes was conflated with ‘Corsican’, which has acidless pulp. One of the first such examples refers to “Corsican citron, or citron of commerce” in the Los Angeles Herald (1901). Generally however “citron of commerce” was in lowercase, indicating that it was a generic rather than a cultivar name, which generally would have been capitalized in the pomological literature of the era. In the first edition of The Citrus Industry, Webber (1943) did not include a ‘Citron of Commerce’ in his list of citron varieties, evidently because he did not consider it to be a variety; but after Hodgson (1967) did treat ‘Citron of Commerce’ as a synonym for ‘Corsican,’ other writers followed him.

The ‘Citron of Commerce’ (CRC 3518) in the University of California Riverside’s Citrus Variety Collection, which traces back to a budded tree bought from San Dimas Citrus Nurseries in 1907 (Toni Siebert, pers. comm. 2022), has acidic flesh and more closely resembles ‘Diamante’. Recent concordance and phylogeny analyses show that CRC 3518 clusters most closely with ‘Corsican’ and ‘Diamante’, but is not identical to these or any other citron accessions in the collection (Y. Hiraoka, pers. comm. 2022). Perhaps CRC 3518 derived from one of the cultivars called “citron of commerce” before the phrase became synonymous with ‘Corsican’."

Tree small, open and spreading; medium-thorny with some large, stout spines (very much like Diamante); buds, flowers and new growth not purpie-tinted.

This variety is said to be the best and most important citron in Corsica and presumably originated there, although its history is unknown.  It was introduced into the United States about 1891 and distributed under the name Corsican.  Citron of Commerce in California is indistinguishable." 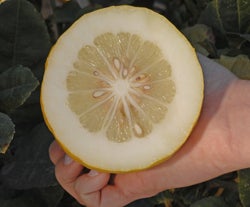 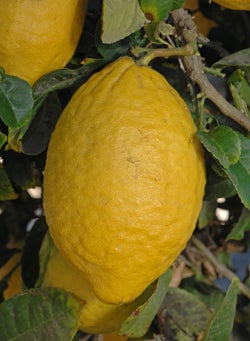