"The original description by Wight reads as follows: "Leaves simple, elliptical-oblong, short-petioled; racemes many-flowered, in the axils of the spines, shorter than the leaves.

"This tree is found, rather frequently, in sandy soil near the sea-coast, flowering towards the end of the cool season, and ripening its fruit about August or September.   The corolla falls a few hours after expansion; hence it is difficult to procure specimens in flower.   That here figured was gathered about the beginning of March."

Swingle's description of the species given when the genus Pamburus was established (1916a, p. 338) reads as follows: "A much-branched shrub or small tree, armed with stout straight spines, these 2-3 cm long, arising singly (or rarely in pairs?) on the side of the bud in the axils of the leaves.   Leaves oval, oblong-obovate or elliptical, 6-10 cm long, 2-4 cm broad, very thick, coriaceous, glandular-punctate, the tip rounded, sometimes slightly emarginate, the base narrowed rather abruptly into the petiole, the margin entire, becoming gray and apparently crenate in drying; lateral veins inconspicuous, tertiary ones not apparent, the two faces very similar in appearance, drying to velvety gray-green unlike those of any other member of the subfamily Citratae [Aurantioideae].   Flowers 12-20 mm in diameter, fragrant, with small pointed sepals and 5 or 4 white obovate caducous petals about 1 cm long.   Pistil about 1 cm long.   Fruit about 2.5 cm in diameter, orange-colored when ripe, with a thick peel dotted with oil glands, 5-4 celled, the cells containing 1 or 2 seeds surrounded by a sticky gum."

This remarkable plant has leaves unlike those of any other member of the orange subfamily.   In drying they become pale gray-green and show what seems to be a fine-textured, velvety surface.   As it grows commonly in the dry region of Ceylon and in the flat, sandy coastal lands of Madras State in India, it may prove to be the fourth genus of the orange subfamily to show somewhat xerophytic structure, the other three being Oxanthera of New Caledonia, and Microcitrus and Eremocitrus, both of the semiarid regions of northeastern Australia.

The wood of P. missionis is used in India for making furniture.   The species should be tested as a rootstock for Citrus with Oxanthera fragrans and Eremocitrus glauca in the hope of finding rootstocks able to grow in soils with heavy content of mineral salts.   Pamburus missionis was introduced into the United States several decades ago.

In 1941, a five-year-old tree of this species growing at the Plant Introduction Garden in Coconut Grove, Florida was about 2.5 meters high and 1.5 to 2 meters wide, with a very dense top composed of exceedingly numerous, short, divergent, very leafy twigs with stout, very sharp spines, 1.5 to 4 cm long, attached nearly at right angles to the twig every 2 to 4 cm.   The younger branches, the spines, and the more or less exposed under surfaces of the leaves were all of the same vivid green color, close to grass green (Ridgeway, 1912, pl. 17).   The upper surfaces of the leaves, also visible in large part, were a slightly darker green, near Hay’s green (Ridgeway, 1912, pl. 6).   The foliage was not only vivid green, but perfectly smooth and glossy, and showed no traces of injury from insects or diseases.   This plant seems admirably suited for making beautiful hedges of moderate height, since it stands pruning well.

Anatomical study of freshly gathered leaves shows that the upper surfaces have two layers of palisade cells and the under surface one layer.   This doubtless explains the almost identical appearance of the upper and lower surfaces of the leaves and the almost complete masking of the veinlets.

The plants grown at Coconut Grove thrived on rather poor, sandy soil that thinly covered a subsoil composed of porous limestone rock.   The pamburus seems to withstand nearly as much cold as the commonly cultivated species of Citrus." 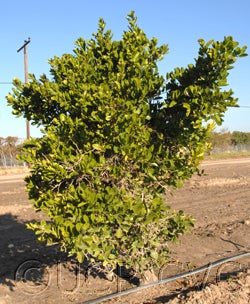 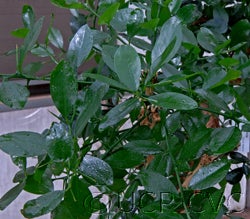 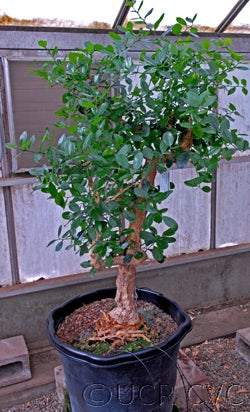