Lisbon lemon trees grow vigorously into large, thorny, upright but spreading trees. Due to their vigorous growth habit, the fruit is usually found within the canopy of the trees. The new leaves and flowers are tinged with purple. Lisbon trees produce several crops per year, but the main crop is winter and early spring. The fruits are medium in size, oblong, with a prominent nipple. The rind is slightly textured and yellow at full maturity. The flesh is pale greenish-yellow, low-seeded, and very acidic. There are many named selections of Lisbonlemon, with individual characteristics that distinguish them from the original clone. 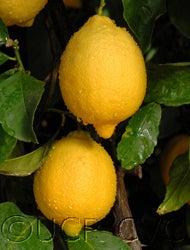 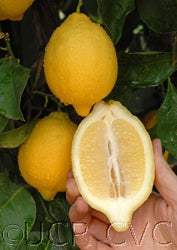