None at this time.

Tree medium in vigor and size, spreading and open in growth habit, virtually thornless; sparsely foliated (in comparison with Lisbon and others); strongly everbearing and produces fruit at the ends of long branches ; precocious; productive.  Tree lacking vigor compared with most other varieties; more sensitive to cold, insect infestation, and neglect; shorter-lived.

The fruit of the Eureka variety differs in general from that of Lisbon, the principal other variety in California, in that it is more prominently ridged and has a somewhat rougher rind surface and usually a smaller and less pronounced nipple.  The tree differences are much more marked.  In addition to those differences, the leaves are darker in color and less sharply pointed and the margins are somewhat more crenate than the Lisbon.

The Eureka variety originated in Los Angeles, California, in a group of seedlings grown from fruit of Italian origin—the seed of which is said to have been planted in 1858.  Several years later Andrew Boyle and C. R. Workman acquired some of these seedlings and eventually they selected several that appeared to be promising.  About 1877, Workman provided Thomas A. Garey, a prominent Los Angeles nurseryman, with budwood from one of these seedlings and he propagated and introduced it under the name of Garey's Eureka (Butterfield, 1963).  Because of its precocity, thornlessness, and everbearing nature, it soon rivaled the Lisbon variety.  Both have remained the principal varieties in California and have achieved the status of major lemon varieties of the world.  Eureka ranks as a major variety in most important lemon-growing countries except Italy, Spain, and a few other Mediterranean areas.  Russo (1955), as a result of a study of varieties in California, recently expressed the opinion that Eureka has its ancestry in the Lunario variety of Italy.

California nurserymen agree that the following clonal selections are currently the most popular: Allen, Cascade, Cook, Meek, Ross, and Wheatley or Thornton.  Within the limits of normal variation associated with environmental and disease factors, bud progenies from the parent trees of these selections are virtually indistinguishable with the exception of Ross, which is more vigorous than typical Eureka and differs in other respects.  It is probably best regarded as a separate variety of unknown origin.

Presumably because of their greater vigor, caused in part at least by freedom from virus infection, the use of known or presumed nucellar clonal budlines during recent years has increased to the extent that virtually all Eureka lemon trees propagated in California are now seedling or nucellar clonal selections.  The only known nucellar line in use is Frost, originated by the geneticist and breeder, H. B. Frost, at the Citrus Research Center, Riverside, California.  What are presumed to be nucellar lines of some of the most popular clonal selections—Allen, Cook, Cascade, etc.—are now in use and others will soon become available." 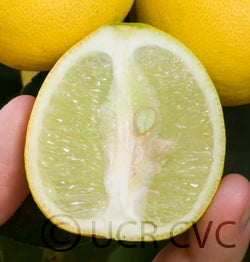 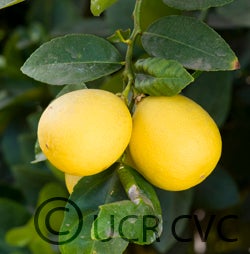 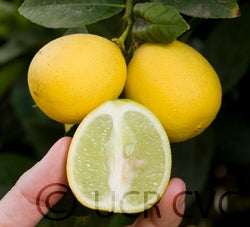