Considered to be a chance hybrid between two of the Fortunella species.

Changshou kumquat, Fortunella obovata, is also called the Fukushu kumquat in Japan. The naturally small tree is very ornamental, has a spreading form, and is thornless.  The leaves are larger and broader than other kumquat species.  The fruit is also larger and slightly different in shape.  Changshou is about one and one-half inches long and oval with a depressed apex.  The rind is orange and thinner than Nagami or Meiwa.  The flesh is orange, acidic, and contains a few seeds.

"The Choju kinkan or Changshou or Fukushu kumquat of Japan is a dwarf variety that is reported to be widely grown as a potted plant in China and also in Japan to some extent.  According to Swingle, it is characterized by the broadly obovate form of the fruit, a markedly depressed apex, medium size, thin rind (for a kumquat), and a rather large number of segments (five or six, sometimes as many as eight).  Seeds are usually few and polyembryonic.  The plant is small and thornless.

This species was established by Tanaka (1933, p. 38) but was not accepted by Swingle who considered it to be a chance hybrid between two of the Fortunella species."

A different budwood source is commercially available in California through the Citrus Clonal Protection Program. Click here to order budwood. 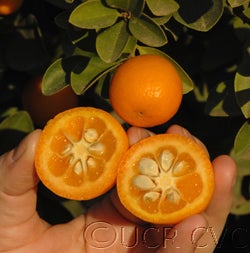 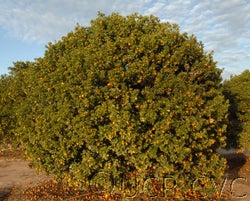