Sudachi is thought to be a hybrid of C. ichangensis and C. reticulata. This accession came from Okitsu, Shizuoka Pref., Japan.

When used for cooking purposes, Sudachi is harvested while still green which occurs during September to October.

11/2009, TJS: "Thought to be a hybrid of a papeda and a mandarin, Sudachi arose as a chance seedling in the Tokushima Prefecture of Japan, on Shikoku island, where it has traditionally been grown (Kawada, 1986). When harvested young, Sudachi is considered to have a distinctive fragrance that is different from Yuzu. The young fruits are used for cooking while still green, often being incorporated into vinegars or flavoring many different entrees, especially fish (Bitters, 1963). In dishes that utilize Sudachi, it is customary for the fruit to be sliced into thin wedges, adorning the main course. The flavor is now also used in soft drinks and alcoholic beverages. The fruits are produced for both processing and fresh fruit markets, with such demand that specialized storage systems were created to extend the market season (Kawada, 1992).

Fruit of Sudachi was formally evaluated by the UCR Citrus Variety Collection in September and October of the years 2003 to 2007 at Riverside, Calif. Significantly smaller than Yuzu, the average fruit size has a mean width of 3.8 cm (1.5 inches) and a height of 3.4 cm (1.3 inches), giving an average height-to-width ratio of 0.90 and an oblate shape, although some fruits can be round. Sudachi has a mean weight per fruit of 27.2 grams (0.96 ounces). Color break was reached between the first and third week of September. The rind texture is slightly pebbly with a mean thickness of 1.9 mm (0.07 inches). The number of seeds per fruit averages 9.1, much less than the average Yuzu fruit. The mean juice weight is 9.6 grams (0.34 ounces) and the average juice content is 34.4%, higher than Yuzu, which is fitting as Sudachi is primarily used for juice. The juice weight and juice content increased during the sampling dates. The internal flesh color of Sudachi in the green stage is light green to green-yellow.  Sudachi is slightly more acidic than Yuzu with an average of 5% citric acid.

Sudachi trees tend to have a spreading habit of moderate vigor, but can be considered a small- to medium-sized tree, as 26-year-old trees on Carrizo and C-35 citrange rootstocks are only approximately 8 feet tall, with no indications of rootstock-scion incompatibility. Thorns up to 5 mm in length are present in each leaf axil. Leaves are elliptical in shape, with a small-winged petiole. The tree canopy has dense branching."

1961, TT: A Yuzu relative that may be worth calling "Mandarin-Junos" of Japan which is exclusively used for acid juice. Few seeds, rind 3.5 mm thick.

1963, WPB: Small fruit somewhat resembling Yuzu. Fruit is reddish-orange, leaves similar to Yuzu, resistance of sudachi to citrus canker is good & gummosis resistance is good. Highly resistant to citrus root borer. Growth is slow, may have dwarfing characteristics. Trees are long-lived. Sudachi is an acid citrus; it bears small fruit (20-25 g) and is traditionally grown in Tokushima Prefecture (Japan). The fruit are harvested only at the green stage and are served in cut halves as a garnish. Polyembryonic.

2/26/1988, EMN: Tree with extremely large crop of marble-shaped fruits. Way past maturity now but still on tree; mummies from past year indicate that the fruit never drop. 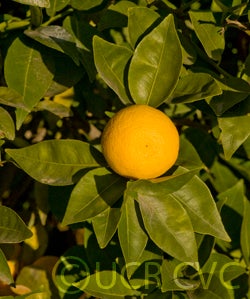 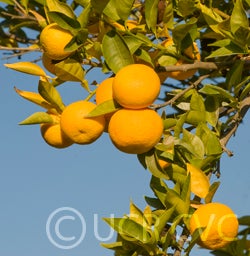 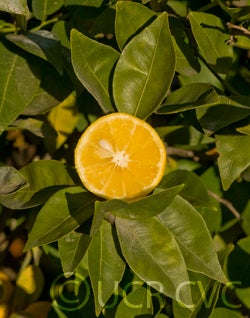 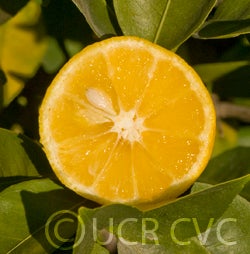 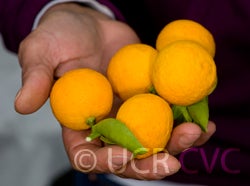 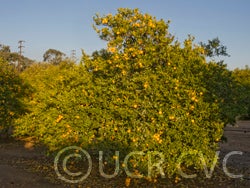 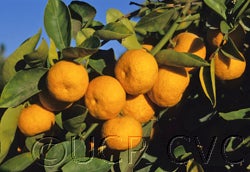